The one in which I bond with a cat


I have a bit of a chequered history as far as cats are concerned.  I'd like to like them, but they don't always seem to like me.  So when my neighbour approached me to ask if I could look after their cat for a few days as her husband was going into hospital and she needed to stay there whilst he was in the high dependency unit, I was a little apprehensive, but given the circumstances - how could I say no?  My first experience of cat sitting was many years ago when we were first married and some friends of Paul's who lived just along from us asked us to feed their cats while they went away on holiday.  Now, this wasn't just one cat, this was three cats.  Three rather expensive Siamese cats.  Giselle, Elvis and Blue.  Now, I have since learnt that Siamese cats aren't the most affectionate of cats and have quite a mind of their own.  So the instructions of 'just call them in first thing in the morning for their breakfast, then let them out for the day and call them back in the evening for them to stay indoors' sounded, to a cat novice, fairly straightforward.  But oh no, Giselle, Elvis and Blue had not listened to their instructions and were not keen on coming home when called.  Oh the embarrassment of standing in a garden calling for Elvis!  They would congregate in their own sweet time, at the bottom of the garden but no way were they coming in while they could see me.  Paul hit on a solution, we would open the patio doors, put the cat food bowls inside the house then we would run upstairs to the bedroom above, open the window, and once all three had slinked inside the door, would close the patio doors from above by dangling a broom out the window.  So why on earth, when the owners returned and asked how things had gone, did I say 'no problems at all, they we absolutely fine'?
My reservations about cats were further entrenched when I once arrived home from dropping my daughter at school to find a strange cat on my doorstep.  'Shoo' I said in what I hoped was a confident tone.  The cat did not budge. 'Go on, go home' I said as I stepped forward to put my key in the door.  Next thing I knew, the moth-eaten moggy had thrown itself at my leg and had sunk its teeth into my calf.  With blood pouring out of the wound, I took myself off to the hospital where they told me it had punctured my calf muscle and as it was a bit of a flea bitten scruffy old cat who did not belong to any of my neighbours, it was probably best that I had a tetanus injection.
However, I may now, for the first time, have bonded with a little ball of fluff that waits for me in her garden, comes in and is pleased to see me, eats her dinner and then demands a bit of TLC before trotting outside on her best behaviour.  She is a cutie, although Coco does not like me coming home smelling of cat!  And I'm slightly concerned about the responsibility of looking after her as her owner casually dropped into the conversation that she is 15 which sounds pretty old in cat years! 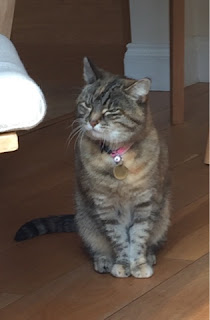 So what else have I done for the first time this weekend?  Well, this is a hint I saw on the internet, and was something I never knew so let me share  ...
... the easy way to crumble an OXO cube without ending up with beef smelling, brown crumbs all over your fingers.  Turns out you do not just unwrap the cube and crumble it between your fingers - no, you carefully prise open the bonded edges ... gently squish the package between your fingers (still in the foil) and it will turn into a soft little parcel of stock cube which you can easily open and sprinkle into a jug of boiling water.  Who knew?  Please don't tell me I'm the only person who's been doing it wrong for years! 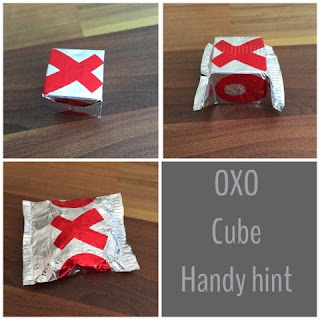 It's the first day back at work after the Easter holidays for me so I really do have that Monday morning feeling.  Linking in with Sian and the rest of the Mondayers, all sharing something new!

she is a cutie and looks well practices at dealing with visiting carers. I always thought you crumble the cube - msut have been how someone on TV did it - have a great week even if it is back at work

she does look sweet. I must try the tip with oxo cubes

I'm not a cat person either. I used to babysit for a family in my teens and their cat gave me the creeps! I don't have the oxo cube problem because, being a veggie, I use vegetable bouillon, which comes powdered in a tub! Good tip though.

Well you know that I am a cat lover, so your tales of kitty sitting gave me quite a few chuckles. Two things you need to know about cats. (1) Cats do not have owners, cats have staff. (2) Cats were once worshiped in Egypt & they have not forgotten that

I've much enjoyed your feline stories and hope both your new inhabitant and her master and mistress do well over the next few days. I will remember the OXo tip and pass it on - I'm afraid my (vegetarian) stock comes out of a tin on a teaspoon.

I smiled at your cat capers too. Over here, our cubes are wrapped but not sealed like yours - they come inside a jar as well. I always unwrapped and then smushed down with a spoon till it crumbles. But if I remember I will try leaving the wrapper on next time.

This really made me smile. We used to have a siamese cat who had a will of his own. When J came to stay with us for the first time not long after we met, the cat woke him up in the middle of the night by climbing through the bedroom window, through the venetian blind and onto the bed. He doesn't like cats. Siamese are real characters.

You have got my Monday reading off to a great start :) Have a good week!

I miss not playing with cats anymore, but having two bears with me wherever I go, does seriously put cats off me lol.

I saw the oxo cube thing a few weeks back and I love doing it. Is it sad I smile when crumbling a cube now lol

Cats, very much like people, are all different, with very differing personalities. Some are wonderful fluffy purr machines, others not so much. Siamese are known for being quite haughty. In the last few years our two have become lap cats. Kira actually waits for me to sit on the sofa in the evening and as soon as I pop the recliner and put a blanket over my lap, she jumps up demanding attention and then settles in for a nap.