Just sneaking in before the end of Monday so I can officially join in with Sian's Memo Makers.

There's a certain member of our family who's experienced a whole load of new things today and I've been lucky enough to share some of them with him.

Today was the first day that Leo's daddy wasn't there to spend all day with him.  The nasty people at Leo's dad's workplace said that his two weeks paternity leave was up and they wanted him back at work.  All day.  What a cheek!  How lucky then that I finished work at 12.30 and was able to pop round and spend the afternoon with him :-)

It was the first time that Leo's mum had taken him out in the car without his daddy.  Daddy normally does all the heavy lifting, getting the car seat into the car, folding up the pram frame and putting it in the boot of the car.  So it fell to me to try and 'help'  - at which point I realised that things have moved on somewhat since I last went out with a newborn.  26 years ago to be precise!  Baby seats are heavy.  REALLY heavy - and then you've got to fix it into the Isofix fitting, line it up properly and wait until the lights stop flashing to confirm it's in properly.  OK, I have to be honest, Leo's mum had to do that bit as there's quite a knack to it.  When I think back to bringing Rachel home 30 years ago, we simply put her in a carry cot, put that on the back seat and put a seat belt over it.  Looking back, it may not have been as safe as we thought it was then!
So whilst she was doing that, it fell to me to fold up the frame to put in the boot of the car.  Oh yes.  That sounds simple doesn't it?  My goodness I made a mess of that. But it was my first time after all.  Line this wheel up there, put on the brake, press that handle in, then push the handle down, pull on that strap, give it a shake, fold it up and voila! The 'voila' stage took a little while to accomplish.
So we set off for Leo and his mum to pop into the doctor's for a check over and then we headed out for the main event ...
Leo's first trip to a supermarket
Does a Monday get any more exciting than that?
So here's the photo to prove it. 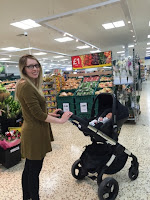 If you see him, don't expect him to remember much about it, he slept through the whole thing.  And then we got home, he woke up, had his afternoon tea/milk and went straight back to sleep.  Which kind of makes me think that's he's used up his quota of being quiet and sleepy for the day, and that his mum and dad may be in for a disturbed evening!
Posted by debs14 at 20:23

How exciting! I'd love a photo like that of the first time I took my baby to the supermarket: a kind lady who probably realised it was a first trip asked me what shelf I'd found him on!

So many firsts. I'm wishing you and Leo and his Mum many many more adventures in the future

That's what I love about the digital age ... it's never been so easy to record those firsts!

Oh what fun experiencing all those firsts especially with your first grandbaby.

Lovely to hear how you are all managing your new arrival - and a little glad I am not the only one who struggles with the grandchildrens' car seats :).

Your work is greatly appreciating.
I too have a blog, please just check it out: https://tech14o.blogspot.com/
and keep doing such great work.

So nice that you are sharing his firsts with us. He sounds like a very loved little one.