Me on the second Monday of the Easter holidays

You often hear football commentators refer to a match as a 'game of two halves'.  One half being played very differently to the other.  That kind of sums up my weekend.  A weekend of two halves.  One half crazily busy and the other half so laid back and relaxed I actually fell asleep for an hour in the afternoon!
We had friends over for dinner on Saturday night. So naturally the thing to do the day before was to start to repaint the lounge.  (It seemed a good idea at the time.) We only wanted to do one wall.  It had been wallpapered in contrast to the three painted walls but it's time had come to be a painted contrast wall.  We stripped off the wallpaper and got one coat of paint on by the end of Friday so that Saturday just needed the last coat followed by a lot of standing back and admiring.  My husband - who was of the opinion that he 'didn't see what was wrong with the paper, it's only been up a few years' had to admit that it looks much better now.  The new curtains which I had ordered and weren't due to arrive before the beginning of May suddenly became available so by the time our friends arrived the room looked quite different.
Of course in addition to the decorating there was the food shopping, chocolate roulade making, vegetable prepping, food cooking things that have to happen if everyone is going to eat once they get here.  Naturally I also had to totally blitz the dining room and conservatory because during the course of decorating things had migrated into other rooms and we ended up with one clean, tidy and redecorated room and two messy, dusty 'we can't let anyone come round this evening with the place in this state' rooms.
So no one will be surprised to hear that after a late night of entertaining, eating and drinking a little bit too much, Sunday was very low key.  The house was spotlessly clean, neither of us fancied much to eat or drink, football was on the TV and I just relaxed on the sofa and next thing I knew, the game was over and the dog was looking longingly for someone to take her for a walk.
Onto Me on Monday - well anyone who lives in the UK will know that we have a General Election coming up.  Today the voting slips arrived.  ﻿ 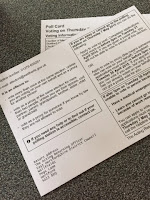 The weather forecast for today was good so I got the washing on early so that it could be dried outside for a change. I am still getting used to there just being two people's washing, my machine is certainly noticing a difference.  It no longer needs to go on every day - which naturally means less ironing so that's a bonus too! 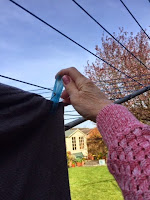 Half way through the Easter holidays now; this time next week I will be doing CPD on PowerPoint and Excel. I feel another sleepy afternoon approaching.  Let's not dwell on that.  Let's think about that dressmaking pattern I have cut out and ready to go, not to mention the fabric that I bought to make my top. Let's think about those temperatures they are predicting for Wednesday.  Let's think about what hairstyle I can choose for my hair appointment this week.  Let's consider how scrumptious Coco is going to look after going to the groomers.  (Who will have the most dramatic make-over I wonder?)
While we're thinking of all those things, let's give up a wave to Sian who may be slowly sinking among a sea of granny squares and socks!
Posted by debs14 at 16:20

Wow: quite a transformational time you are having! The decorating sounds lovely.

I hope this week sees you sewing and enjoying your new surroundings. Our two weeks are up and we had an early start this morning (really quite early because someone thinks he must have moved the alarm clock round again while he was asleep..). Have a great week!

Lots going on in Deb's World right now :) I've got two loads dry today and enjoyed the sunshine on my afternoon walk. Looking forward to seeing your Sorbetto top. Enjoy the rest of your time off.

Having a spotlessly clean house on a Sunday sounds blissful - especially if there's no Monday work to follow. Glads you are making the most of that time off, and finding the benefits to just being two :).

Enjoy your week Deb...no wonder you had a quiet day on Sunday..Saturday sounds hectic! Xx

I like that - "weekend of 2 halves" I must remember that one. Your very brave doing that decorating the same day as company coming. I would have been a wreck. :)

My goodness, that is a lot going on. Sounds like a lovely weekend! :)