What's the worst way to start a half term holiday?  With a 9.15am dentist appointment.  What was I thinking?  I don't like dentists and that dislike goes back a long way.  In fact the first time I ever remember really getting told off related to the dentist.
When I was little, the local dentist operated out of an old house near to where we lived.  The ground floor was a surgery and he lived upstairs.  It was old and it was cold and it was creepy.  He had an assistant called 'Miss Lawrence'.  She wore a long white lab coat and had crepe soled sensible shoes that squeaked on the linoleum as she walked down the hallway to take you from the waiting room to the surgery.  You sat there in the silent waiting room and you heard the squeak, squeak, squeak of her approaching.  The door would open and you would hear 'Deborah ...'  She was Scottish and she pronounced it 'Dee Bore Ah' it still gives me the creeps!  The dentist, Mr Holdsworth, was (in a small girl's eyes) ancient and scary.  He didn't really speak to you and just called things out to Miss Lawrence as he poked around in your mouth with a very sharp instrument.  His policy towards teeth was 'if in doubt - fill it' and therefore all the local children ended up with a lot of fillings!  It wasn't until I got married and moved out of town that I discovered that most other dentists gave injections to numb your mouth when they did treatments - we had to 'grin and bear it' at our surgery.
So how did I get into trouble?  Well, my mum used to have a small wallhanging in the kitchen that you could write on and then wipe off and she used to use it as a memo board/shopping list.  I can still see it, there was a Mabel Lucy Attwell picture and a short poem:
When you're going shopping
You really should insist
That when you're running short of things
They're put down on this list.
'Twill save a lot of time in town
If everything is jotted down.
Well, one day I saw something awful written on that board.  Can't remember the date but it was something like 3 April - Dentist.  Now I knew that I would NOT want to spend the 3rd of April at the dentist so I changed it.  I added a '1' to the front so it said 13 April - Dentist.  So when Miss Lawrence rang Mum on the 4th of April to find out why we hadn't turned up, my little freckled face glowed bright red as I had to admit what I'd done.  Oh boy was I in trouble! REAL trouble because not only had I embarrassed my mum, she said I would have to apologise in person to Mr Holdsworth myself.  Talk to that scary man?  That big man with the deep scary voice and the pointy sharp things?  I was so scared.  Fortunately Miss Lawrence saw the funny side of it but I learnt a valuable lesson that day, no matter how scared you are of the dentist, you do HAVE to go! Anyhow, I've escaped unscathed from my appointment and don't have to go through that stress for another 6 months so all is good.  But talking of scary things ... 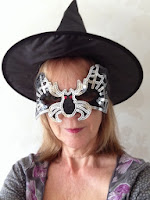 Not sure how long the hat will stay on but it's a start!
We managed to extend our weekend again by starting on Friday night with a family gathering with my sister and brother in law so it was a homemade curry night, sorting out who's going where for Christmas, quilt sewing, Strictly Come Dancing watching, extra hour in bed as we left British Summer Time for Greenwich Mean Time, delicious Sunday lunch at a friend's house, sorting out problems with the TV and saying goodbye to our neighbours opposite as they prepared to move out today.
Me on Monday - a brilliant idea from Sian
﻿
Posted by debs14 at 10:14

What a great story! My childhood dentist was of the same ilk and the majority of my molars have fillings too. Enjoy your half term week.

Brilliant! I love this story. Funny I woke up this morning on the first day of our half term and said to myself - I've got a dentist's appointment next Monday at 9.15!

Have a great week off. Oh, and I love that photo too

Great story....I was often tempted to do the same!!

Oh my gosh, Deb, this is such a great story - so well told! I loved reading it, even though I was shocked to read that you had to endure that horrid dental work with no pain medication!

When I was little I had a few fillings and a few years later my younger brother did the same. He mentioned, "Those shots in my mouth didn't even hurt" and I was surprised to hear that he got shots! Turns out my lovely dentist had a way of distracting me and drew the needle up from under my chin - I never even saw it coming because I was looking at the butterfly mobile overhead.

Thanks for entertaining me today with the follies of little Dee-BORE-ah. (I always hate that too!)

Your dentist story made me laugh Deb - your plan was quite inventive! Enjoy your week off for half term.

I can so remember my own childhood dentist visits! Enjoy Half Term!
Alison xx