Ah, the first day of the school half term.  It really doesn't start until next week but it's a CPD day today for teachers and the secretaries get an extra day today as we don't have to work CPD days.
So a quick trip over to my nearest Hobbycraft, picked up a 'few' bits and pieces, came home, met a friend of mine for a pub lunch and nice glass of wine then back home to do a bit of sewing.
Last time I went to a crop, Denise and her friend Jane had some rather snazzy bits of equipment that Jane had made for them.  They are called 'thread catchers' but basically it's a portable bin for all the little extra bits that get cut and snipped and discarded while you are busy scrapbooking.  Jane had made theirs out of some rather gorgeous Cath Kidston fabric but in the absence of a CK shop locally, I had to improvise!  I'm still pretty pleased with the end result though: 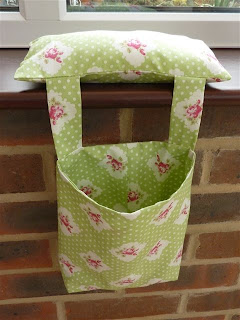 The top cushion part is weighted down so that it holds to the edge of the table but I've also put a wad of padding in there too so it can also be a kind of pincushion.  No excuse for a messy table now eh?
Posted by debs14 at 15:59

We will have to sit in a line and have them all lined up on the desks!.Yours looks brilliant (wish I could sew)I love that design-perfect. Am very impressed xxxx

It looks really good. Maybe you should start a production line?

I used to go to a crop where an Australian lady had what she called a 'Beanie Bin' which was basically this idea...yours looks fabulous, I love the fabroc...very CK-esque!!!

Just catching up on your last post too...wasn't that a lovely surprise...do post some pics of your finished cornmeal recipe!! I needed cornmeal for a recipe a while back & it was suggested I use Polenta instead..it worked well!!

What a great idea....and yours looks wonderful....love that fabric [every bit as good as CK I'd say].
Enjoy your half term.

What a very nifty idea - I could do with several of those strategically placed around the house!

Such a happy color you chose for your scrap catcher!

Love it Debs. We will all have to make one now.

How cute! I have a little pop up bin I use, can't imagine not having it :)