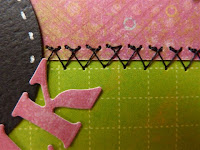 Anyone that goes to Sue's crop days at WGC will know that she does a 'Sneak Peek' to show you a little about what you are going to be doing. I've enrolled for the Tracie Hudson workshop in August and part of that includes a pre-workshop page you have to do on your own at home and will be judged on the day.
I spent the best part of yesterday afternoon on this page and this is my version of the Sneak Peek for what I have done. There is one aspect of the challenge left to do and that is to include paint on the page. Slight problem as I only have one pot of scrapbooking paint, and that is silver. The other part of the problem is that I am not an artist - me and painting are not a marriage made in heaven. This needs some careful thought ..... does anyone have any ideas for foolproof ways of incorporating paint onto a page without ruining everything else?! 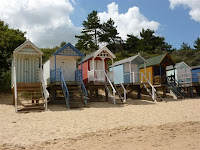 Hey - Guess What? I found some more beach huts! It's now official. I am slightly obsessed with them. These little beauties were on the beach at Wells next the Sea. There are dozens of them and they are so pretty. All individual and some a little quirky.
We had a fab couple of days up there and despite dodgy weather forecasts, we had mostly very good weather. Even sat on the beach for a couple of hours. Stayed at a lovely hotel. The Crown at Wells next the Sea. I would really recommend it. In a good position, modern, stylish comfortable rooms and we enjoyed a lovely evening meal there last night.
Have taken lots of photos - so am looking forward to doing a few layouts to show them off very soon. Oh the joys of having 6 weeks off work in the summer holidays ;-)
Posted by debs14 at 20:12 No comments: 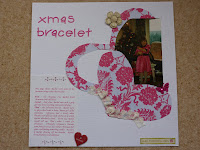 After I had done the page showing Jon at age 4, I knew exactly which photo I wanted to use for a page showing Rachel at the same age. This shows Rachel on Christmas Day, showing off her new silver bracelet. There was a little girl at playschool who wore a silver charm bracelet and Rachel drove me mad, constantly telling me how beautiful this bracelet was and how much she wanted one. Never mind that the little girl was Chinese and the bracelet obviously came from somewhere far away - this is what Rachel wanted for Christmas.
Father Christmas did his best to find as close a match as possible and Rachel was thrilled with it (as you can see!) Rachel has had several bracelets over the years since, and we have quite a few photos which recreate this pose - it is so Rachel!
Posted by debs14 at 14:47 1 comment: 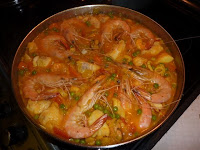 It is now officially Summer. Last night we went to our friends' house for a Paella Evening; it's kind of a landmark to the seasons when Paella night arrives.
Richard is the king of paella. Which is kind of appropriate as that is his surname! His paella recipe is unrivalled and even though I have stood in his kitchen and watched him cook it - I still can't recreate it at home. And trust me, I have tried. The only downside to eating his paella is that it spoils you for any other paella, anywhere in the world. Again, trust me, I have tried. The only place that kind of came close was in Valencia which is the birthplace of the dish and we had a meal in a traditional paella restaurant that is steeped in history.
So my friends, much as I would like to share a plate of this delicious food with you, you will have to take my word that it is devine and just enjoy looking at the photo!
Posted by debs14 at 15:32 No comments: