My Month in Numbers

Time to join in with Julie Kirk's Month in Numbers. How can we possibly have got through to the end of March already? 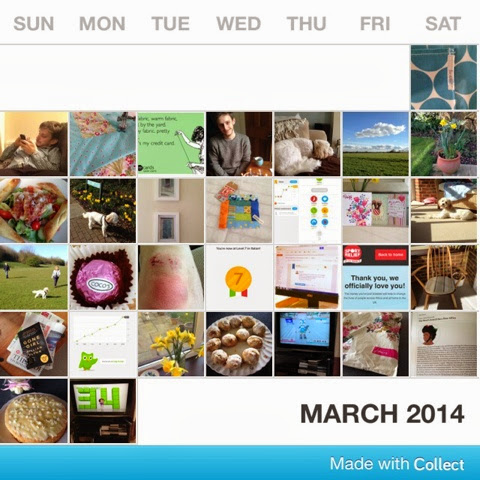 It's been an eventful month. There's been blood, sweat and tears.  Oh yes.  Don't let anyone tell you it's uneventful over here in Deb's World.
This month I discovered a sad, neglected Wii fit machine lurking amongst the cobwebs beneath the tv.  In a moment of madness I ran upstairs, changed into joggers and switched it on.  I then spent a further 15 minutes trying to hunt down new batteries as it's been so long since I last used it, the batteries had run out.  However, despite it telling me that in the 1120 days since I last used it {oh the shame} I have got less agile and more heavier, after doing the fitness test it gave me a Wii fit age of ... drum roll ... fanfare of trumpets ... bring on the dancing girls ... 34.  Which was a bit of a shock because I had a birthday this month and I'm pretty sure that it was my 56th.  Clearly that birth certificate is wrong - happy days!
I'm not the only one with a March birthday, my son was 24 on the 5th and my great nephew was 2. So add us all together and we make 82. Unless we believe the Wii and it's 60.
Talking of sons, ours came home twice this month. One visit was only for 4 hours as he was en route somewhere else but every minute counts!
I've been in the wars this month. I needed up with 10 large blisters following a cryotherapy appointment at the doctors. Let's just say the nurse got a bit 'trigger happy' with the canister of liquid nitrogen.  Don't ask! Then I had a pretty impressive fall while walking the dog which resulted in two grazed hands, one bruised finger and a cut and bruised knee. Also one confused dog who couldn't understand why we returned home so quickly after setting off. Before she had even had the opportunity to do what a dog needs to do.
I made three cushion covers and sent off one patchwork quilt block.
We had a fire drill at work and managed to get 1123 students and over 70 staff safely out of the building and into the school field in about 10 mins.  Fortunately this was the day before my fall otherwise I would have had to ask matron to give me a lift in the emergency wheelchair.
So how was your March?  Why not join in and see what numbers you can come up with too?
Posted by debs14 at 21:47 12 comments:

Have been thoroughly spoilt on Mother's Day. My daughter has done all cooking all day from homemade pancakes (a brilliant recipe made with cottage cheese and oatmeal) for breakfast and teriyaki salmon for lunch. Dessert combined all of my favourite things and provided an ideal zoom in zoom out combination too. 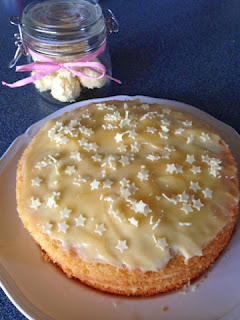 Are you ready for that close up? 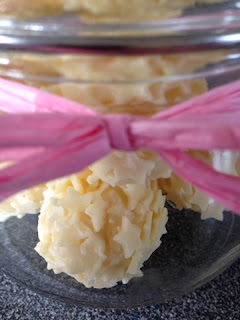 Inspired by Helena's zoom in zoom out Project

Remembering my Mum with love and very special memories on Mothers Day. Always in my heart x
Posted by debs14 at 17:23 7 comments:

Let's sit and have a cup of tea

Here we are again, these months are flying by aren't they? Tea or coffee, which would you prefer?
Your timing is good,I made these Greek Easter shortbreads yesterday, tell me what you think and let me know if you can guess what is in the middle. 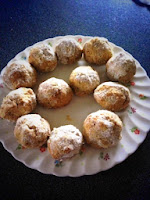 I learnt the recipe at last week's cookery club and I think they are a winner. Little balls of pistachio shortbread wrapped around a chewy chocolatey centre. What makes it chewy? Well the secret ingredient is not something I like but I have to admit that it is a success. Dates. Just 3 but they just add a little texture to the chopped chocolate.
I've had a busy sewing month, see those two colourful cushions? 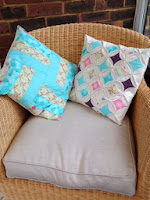 They were designs I found in the Love Patchwork magazine. Whilst I loved the cathedral window design, a cushion cover is quite large enough, I would never manage a whole quilt!  I've also recovered the seat cushion on the Ercol rocking chair. Time to start on the next friendship quilt block.  Deb Turtle's up next! What have you been creating since we last got together?
I can see you have noticed the Wii fit is out in the lounge. Do you have one?  According to ours, in the 1120 days since I last used it (oh the shame) I have got less fit and more heavy.  Oops.  Time to put both those things right. Maybe I should step away from those shortbreads! Oh my goodness, it's not long until Easter either which always involves a bit of chocolate here and there. Willpower, where are you?
And once again time has flown by and it is time for you to leave to pop over to Abi's and see who else is inviting you to join them for a cup of tea.

Simply a moment in March

Even though it is only 8pm, I am already in bed.  Not actually 'in' bed, but sitting on the bed watching TV - with my trusty canine pal in her favourite place nestled into cushions on the floor.  It's a real girls' night in and the reason we are upstairs so early is because my daughter has a group of friends round for dinner and we have come upstairs to give them some space and privacy.  I quite like snuggling down to watch TV upstairs so it really is no hardship.
My bedroom is the width of the house and so is above the kitchen and the dining room.  Although I can't hear actual conversations, I am aware of the chattering and laughing going on downstairs.  The opening and closing of the oven door and the clink of cutlery on crockery is a clue that the cooking part of the evening is over and they have moved into the dining room to eat.
As I listen to the rise and falls of their voices I smile and give thanks that she has such a close group of friends.  They have shared her happy times and given strength and sympathy in the bad.  How she would have got through the year before last without them I do not know.  Parents can give support and love, but there are some things that need to be discussed and advised through your own peer group.  I am thankful that at this point, they are there to see and hear about how things are so much better now.  To share in happy times again.  They have all had a role in helping her turn her life around.
This particular group of friends include girls who she met when she was 11 and have shared 16 years of growing up; some are more recent additions to the group.  Some have already embarked on starting families, some are seeking new jobs, some trying to decide if the time is right to settle down, one is about to move house.  They all have their parts to play in the dynamic of the group.
The overall hubbub of the conversation is interspersed with the occasional gasp - 'NO!' 'Oh my life!' 'He didn't!' What?' 'Seriously?' and I wonder what tale is being told. No doubt she will share any funny stories tomorrow over breakfast.
The volume of their chatter diminishes, I can hear the dishwasher being opened.  The evening is drawing to a close.  'Bye Babe' 'Thanks a lot, Hon' 'That was great Rach' 'See you soon' and the front door closes.  The dog senses that it is safe to return downstairs and rushes down to see if any leftovers are available for supper.
This is written as part of Alexa's idea to share Simply a Moment each month.
Posted by debs14 at 18:10 12 comments:

... "But sometimes age comes alone"  goes the quote by Oscar Wilde. I seem to be proving that saying well.  Last week I celebrated my birthday, another year on the clock.  Not so much wisdom being gained though.
For if I was a wiser woman these things would not have happened in the last few days:
I would not have worn my lovely new Zara suede wedge heeled pointy toed ankle boots to work on the day we had a fire drill and had to trek over to the furthest point of the school field.
I would not have tripped over whilst walking the dog, resulting in two grazed wrists, a cut and bruised knee and wounded pride.
I would not have tried to open the lid of a casserole dish while not wearing oven gloves when said casserole dish had just come out of the oven.
I would not have breathed in just before biting into a birthday chocolate that was covered in icing sugar thus choking on sugar dust.
And I would not have asked for help blowing out my birthday candles 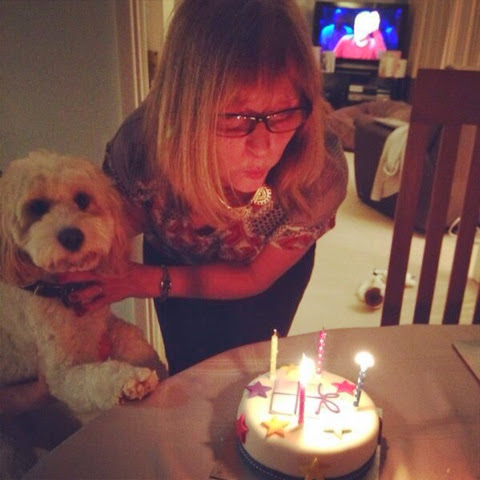 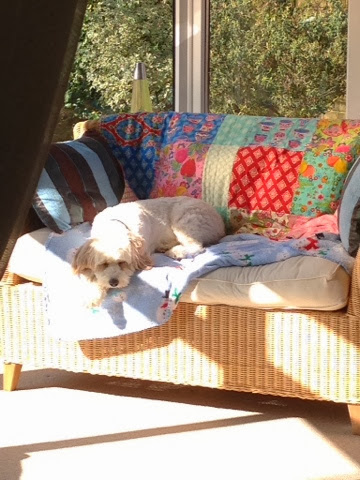 The best seat in the house is, more often than not, occupied by the dog! How she loves to sunbathe.

24 years ago we welcomed our son into the world. That boy has certainly kept us entertained over the years and we love him to bits. He's living in Edinburgh at the moment, supporting his girlfriend while she studies for her Masters at Edinburgh University. But he managed a long weekend back home which strangely coincided with the opportunity to return to Scotland with his hand luggage full of birthday presents. Lucky that eh?!
So you can't have a pre-birthday visit without a pre-birthday cake can you? Perfect for Helena's meme of zooming in ... 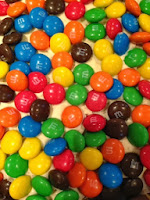 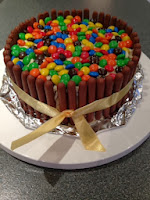 We thoroughly enjoyed having him home, even though it was just for a few days and I am already counting down the months to when he will be back 'down South' again for good.
Other news since I last blogged is that I made a new cushion cover for our newly decorated bedroom.  I'm planning to make a couple more of different designs to add a bit of colour to the room.

I don't work on a Wednesday and when I go into work the next day, people often ask me what I've done with my day off.  Quite often the answer is 'I just really spent most of the day sewing.' And I can see from their faces that they are thinking 'Sewing?  Seriously? You spent your day off sewing?' Maybe they think that's a bit boring, or a bit 'fuddy duddy'.   Maybe we could give sewing a bit more of a risque reputation if all us sewing people went onto Amazon and bought this book ... 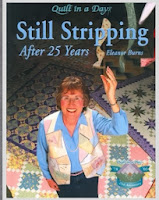