Scavenger Hunt one month in

I'm so happy to be linking in with Rinda for the 'how are you doing' monthly roundup of Scavenger Hunt photos.  I normally get most of my finds when I'm on holiday but this year we went away earlier than usual and I knew that I was going to be extra observant on the last few days of my holiday as the list went live 3 days into our visit! 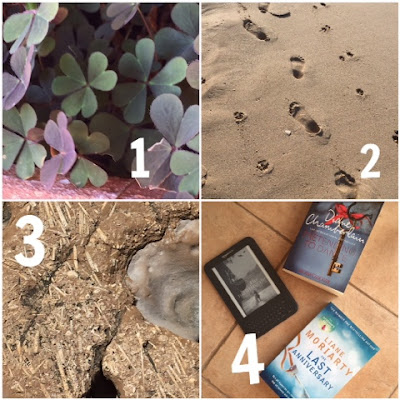 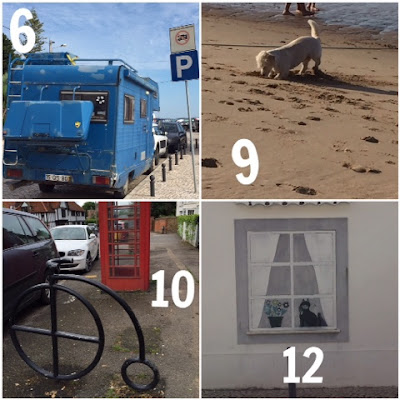 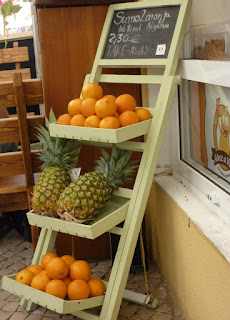 11 Fresh produce has to sit on its own as it was taken on a camera and not my phone! 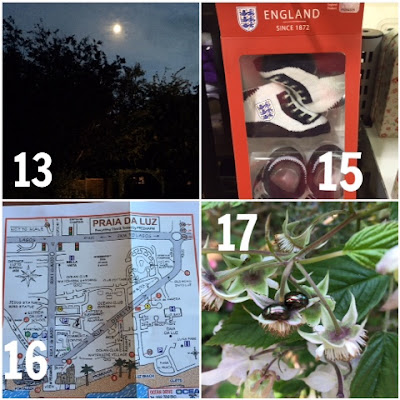 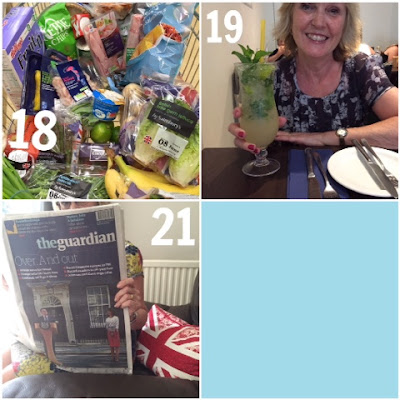 And so I am missing 5 a porch or deck, 7 a family gathering 8 a drawing/art project 14 a buffet of food and 20 someone laughing.  I am wondering if us Brits can use a photo of a garden patio for number 5, the porch to my house is really not photogenic and we don't have wooden decking - I may have to put my thinking cap on for that one!
How's everyone else doing?  Big thanks to Rinda for organising this again, it really does make you keep your eyes open!

On a day where I realise that I care more about politics than I thought I did. 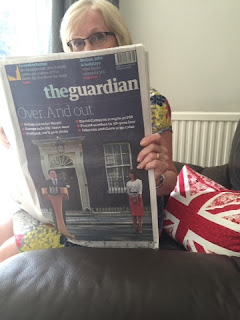 {Also shamelessly copying Mel's idea for a Scavenger Hunt photo!}
We tend to leave the politics to our son in our house, with a degree in Politics and a Masters in African Politics, he usually has an opinion or two to voice whenever something comes up that is newsworthy.  But this weekend I felt, for the first time, very sad and disappointed.  Normally when we have a vote, it doesn't feel too bad if the person you were backing doesn't get the majority vote (and I do have a 50:50 history of getting it wrong!) as you only have to live with that decision for four years.  But this time it was a big decision, I knew it would be close but I didn't realise that it was would be so close - or that I would feel so deflated when the results came in.
We are certainly living in interesting times.  What did you learn this weekend?  Why not share it with Sian and the rest of the Monday crowd?
Posted by debs14 at 15:39 8 comments:

Sian asks us to share something new for Memorandum Monday, well I've never spent a Monday morning watching one of these before. 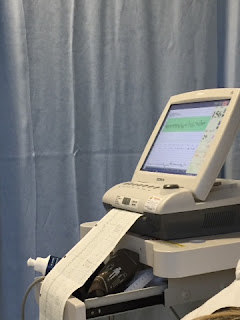 Hang in a minute, did any of the overly observant out there notice the label on the front? The one that says Labour Ward? So you now know it's not me that's hooked up to the monitor! Rachel had mentioned at the weekend that although she could still the baby moving, the kicks weren't as strong as before, and the routine of when she felt them had changed.  I thought maybe the baby had changed position and so the movements were happening in a different place.  She was still worried this morning and rang the hospital who said that it was important to get it checked out.  Her fiancé was already on the train to London and the hospital said to come NOW so I was woken by the phone ringing to ask if I would be able to go with her and keep her company.  Not the best way to start the day.  So after half an hour on a monitor and an hour waiting for a doctor to finish his meeting she was given the all clear and told that all seemed well, maybe this is what her 'new normal ' was going to be.  However, just to be on the safe side, they've booked her in for a scan later.  Guess where I'm going this afternoon?
Talking of babies, when I was planning this post yesterday, I was thinking it was going to be about MY new baby, my new car ... 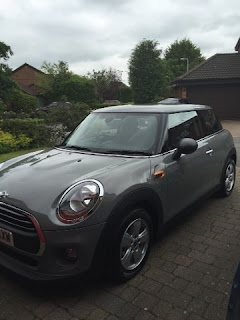 Whilst I was sad to give my red one back, I'm already loving the new one!  Now if only the rain would stop so I could plan a Mini adventure to take it on!  How's your Monday going?

Last Monday I was scratching around for ideas and only came up with something gardening related.  But there was no such problem this week.  Oh no.  I've got something much more exciting for you this week.  I'll give you a clue by showing you a Whatsapp message we received on Sunday from our son who was on a weekend away with his girlfriend.

So my new thing for this week is that we have a new person joining our family; I'm gaining a daughter in law. He's taken us all by surprise, and his girlfriend fiancée said she had absolutely no idea whatsoever, but it may explain why he was drinking so many G&Ts when they first arrived!
I don't think we've ever had so many exciting new things going on in one year before, I'm beginning to think that it's no coincidence that it's all happened since Sian introduced Memorandum Monday to get us all sharing new things!
So while I go and browse Mother-of-the-Groom outfits, why don't you pop over to Sian's and see what she's been up to this weekend?

The first Monday in June and all I can come up with that is new for Sian's Memorandum Monday is a gooseberry bush. 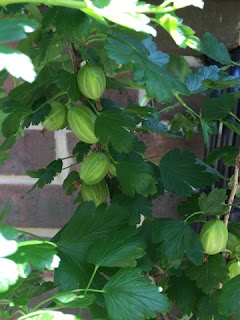 But you have to remember that it's my first day back at work after a week away in Portugal and it's hard to get back in the old routines.  There's not been a lot of 'new' to do.

Back to the gooseberry.  This is the first year we've had our holiday so early in the year, but there's grandparenty things happening in the 'proper' summer and we daren't be out the country when that happens!  Normally we look after our garden all year only to find that the week we go away in August is the hottest of the year, daughters and sons 'forget' to go round and water the plants we've lovingly nurtured and we come home to dried up, neglected fruit and veg.  This year, my husband decided that as we would be around in summer to look after things ourselves he would build a raised vegetable patch (raised in an effort to stop a certain furry family member from 'helping' with the digging.  Spoiler alert - it doesn't make a blind bit of difference!)and grow more fruit and veg because we all know, nothing tastes quite so good as a freshly picked home grown vegetable.  One thing that he loves and I don't is gooseberry.  He loves them in crumbles or gooseberry fool, I spend a lot of time scrunching up my face and saying 'but they're so sour'.  He was adamant though that this year, he would be growing his own (partly because whenever I go to the supermarket I forget {ahem} to buy them).  Imagine his surprise to arrive home this weekend and find that while we've been away a large bunch of little green berries have appeared.  I think that the rather large downpours of rain we've had here while we were in Portugal may have helped.
So that's my new thing for the week.  A new fruit in the garden.  A new success.  As for me, I'm just relieved that while he's feasting on gooseberry crumble, there'll be all the more home grown raspberries for me!
Posted by debs14 at 14:26 8 comments: