Paul is having a major tidy up in our study and in doing so, came across a couple of old pictures of Jon. When I saw this one, I knew I had to do a scrap page about it. 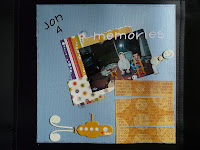 Jon was not always keen to go to nursery school. He hated the thought that he might be missing out on something at home and didn't like to think that I would be going out, doing something without him. So before he left in the morning, he would say which toys he would like me to have ready for his return at lunchtime. Unluckily for me, these favourites would always be the multi storey car park and the farm set, and sometimes the road layout too. All of which had dozens of bits to join together. Fine if I really was only going to be at home for the morning, but if I planned to go shopping or meet up with friends, I had to rush home and build them all ready for his return. I became world champion speed car park builder!
I've had a busy day today, reading my book and having lunch in the garden, scrapbooking a page, booking a couple of days away in Norfolk and a special surprise day out for my daughter's birthday in a couple of months. Just enough time left to watch a bit of wimbledon - oh the joys of not working on Mondays ....!!!
Posted by debs14 at 15:44 1 comment: 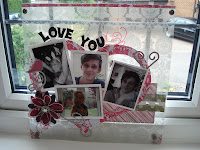 When I was at the crop last week, I bought a kit which included an acetate sheet. I'd never done a layout on that kind of 'paper' before but have always been impressed by other people's work on it. I really like the effect and think I may need to invest in some more sheets so that I can continue experimenting ;-) The only problem was that I wasn't sure how to show the finished page to it's best advantage, if I laid it down you lost the 'see through' effect so in the end I propped it up on the window ledge.
Today is Father's Day and it's now been 20 years since I lost my dad. I still hate the fact that I have no one to buy a card and gift for and I still miss him so much. But I know that I crammed a whole lifetime of love into the years I did have with him. Love you Dad x
Posted by debs14 at 10:09 1 comment:

OK, I'm going to put my hands up and admit that I wasn't too impressed when I saw the first layout that we were shown at the Crafty Stash crop yesterday. For a start, the photos I had taken were of my children, who at the ages of 22 and 19 probably wouldn't have been impressed at having their faces added to animated mermaids and mermen! But in the interests of learning something new, we stuck with it. It was good to learn the mechanics of making an interactive page, something I had never done before and quite an achievement to find that when I finally put it all together and pulled the tab, the merpeople did move from side to side. When I got home I found some pictures of my nephew's lovely children and they were perfect to finish the page. See the little fish at the bottom of the page? When you pull them, the merpeople move (you'll have to trust me on this one!) 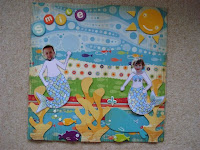 The second layout was far more appropriate for the picture I had taken. On Saturday we went up to Sheffield to bring our son back from the end of his first year at uni. I took a photo of him with his sister outside his block of flats and the colours were perfect for the papers that we had been given. 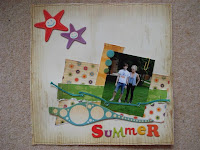 A Month of Colour

A new project from Shimelle started on June 1st and it sounds like it could be fun! It's called Colour Challenge and I had an evening to myself last night so took the opportunity to spread papers and ink and glue all over the coffee table and make a huge scrappy mess in the lounge whilst making my first page. 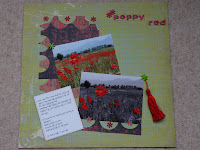 The journalling reads "When I was little, I never liked the colour red. I guess it may have had something to do with the fact that I had ginger hair! Something inside me told me that red-heads and red don't go well together and so I stayed well away.
But recently I've found myself picking up red papers, wearing red accessories, choosing red nail varnish and loving fields of red poppies.
I'm finally ready to love red."
One other thing I am loving is the technique for taking a colour picture, turning it black and white and then replacing some of the original colour. Now I know how to do it, expect to see more of it on my pages!
Posted by debs14 at 07:50 1 comment:

I type this with bleary eyes following about 1 hours sleep last night and not with all 60 minutes in one stretch. When the kids were little I used to worry about all manner of things and my sister would say to me, make the most of the worries being little as it only gets worse when they get older.
Pah! How could that be so? Surely as they got older they would mature, be independant and cope on their own. Much more worrying to be had with temper tantrums, colic, clinginess, escaping from car seats, running off as soon as hands were no longer being held etc etc.
How she must be laughing now when I ring her with yet another anxiety ridden catastrophe to report. To be fair, she has never actually said 'I told you so' - but I know she is thinking it!
So what caused last night's wakefulness? My daughter (age 22) has been over to America to visit a friend who is out there for a year. This was her first solo travelling trip and she is not a good airplane traveller at the best of times. She needed two flights to get home, one of about an hour and then the main 8 hour one. I spoke to her as she was waiting for the flight and it was on time, she was sitting by the gate and ready to board. As the time for departure came and went, I checked on the internet that it was airbourne and to confirm her arrival time back in the UK and then went to bed.
An hour later, a phone call - which spooked me as we all know you don't use your phone on an aircraft in flight do you? 'We've had an emergency landing and the brakes don't work. I don't want to come home on this plane.' My blood pressure now soaring while reassuring her they won't let it take off again before the engineers have fixed it. 4 hours later and several more texts 'we've got off the plane' 'we've been given meal vouchers' 'they say they've fixed it and we've got to get back on. I'm scared' By now it is 4.45am our time and I am a wreck, knowing how scared she was and wishing she wasn't on her own whilst knowing that there really is nothing I can do. The last text I had was at 5am. 'Now there are police wtih guns on board' Sleep? I don't think so!
So to anyone reading this with little children, please don't lose too much sleep over worrying about the little things - your maternal instincts are going to be put to the test for many years to come!
Posted by debs14 at 09:21 1 comment: