Memos, Mail and me

It's happening again folks.  I'm being 'taken over' by a colour.  It's subtle, it happens gradually, it lies in wait and sneaks up on you.  Before you know what is happening, you've 'accidentally' bought three new things in a 'totally different colour to normal' only to find out that you may be hatching a new 'normal'. 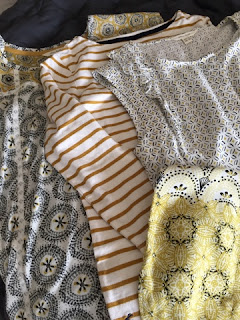 A new top, a new long sleeved t shirt and new dress.  All of which seem to have tones of the same gold/yellow in them.  How long have I liked yellow for goodness sake?  It's really not my kind of colour at all. 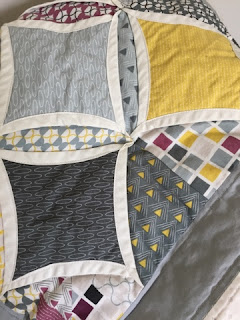 A quilt I made a couple of years ago which has been on the grey sofa in the lounge. 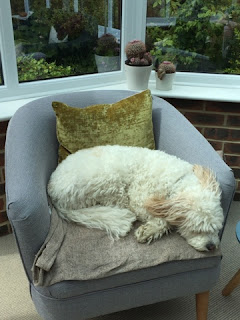 Where on earth did that dog find a gold cushion for 'her' armchair in the conservatory?

I mentioned a couple of weeks ago how while tidying out my wardrobe I realised that I could date clothes by the colour tones in them and how I obviously have favourite colours every year.  I'm guessing this is my golden year then!

So, let's move on to things that arrived in the post this week.  Well.  I was lucky enough to be a randomly chosen winner of a pack of postcards from Kat Sloma following the Liberate Your Art project and a beautifully stamped envelope arrived this week containing all these beautiful pieces of artwork.  Definitely great inspiration for when I'm trying to find photos to use for next year's 'Liberation'. 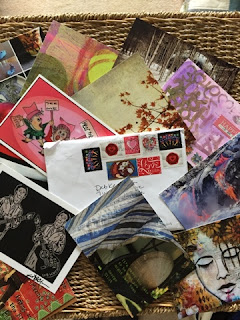 There's half term looming - and a trip overseas planned.  Possibly the chance to get some photos to use for LYA2018?  Somewhere we've never been before, but somewhere that people say is beautiful.  Somewhere with Italian influence but not in Europe.  So I'll be AWOL next week for Sian's Memos, Mail and Me but that doesn't mean that I won't be checking up on the rest of you if I find internet connection.
Posted by debs14 at 09:00 6 comments:

My posts for Sian's Memos, mail and me theme seem to sometimes mimic those 'What am I?' puzzles in  magazines.  Here's this week's offering: 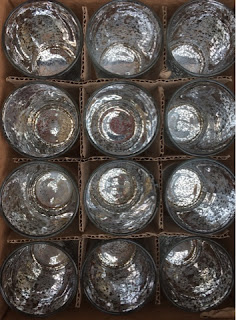 There is a lot of silvered glass appearing in our house.  (and someone in the house is muttering about 'where is this all going after the wedding?') This week - tea light holders.  To go either side of 10 small silvered glass mason jars which will have flowers in to form a row of prettiness along the top table at the wedding.  They don't look too attractive from this perspective but when they are out of the box they catch the light beautifully.  I think I have now officially ordered all the 'bits' that we need for the reception, now to start pulling it all together!

I did actually order something totally non wedding related this week too and it's not often that my husband takes much interest in what I buy 7 year old relatives for their birthdays but as a keen nature lover, he thoroughly approved of this present. 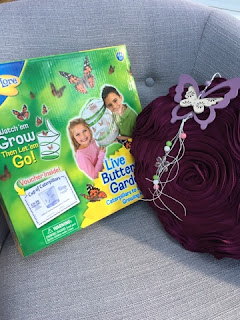 It's such a good idea whilst helping children learn in a fun way and increase the butterfly population.  You send away for a cup of caterpillars and watch them go from caterpillars to chrysalises to butterflies in a little pot, then you move them into the pop up 'garden' to mature and when they are ready you release them into the garden. Now it's met with adult approval, I hope that my great niece finds it as interesting as we all think she will!

Hoping everyone had a good weekend - don't they go by quickly?  My Sunday started with being woken up by someone sticking her thumb in my eye.  Followed by drumming their fingers on my nose and finally pulling my hair.  This was a first for me to report back on for the Monday project.

Leo came to stay overnight - without his mum and dad.

I think we were all a little apprehensive!  His parents had been invited out for a birthday celebration night in London, their first 'proper' nightclub evening in the city since he was born, and originally I was going to babysit at their house.  But it was going to be a late night and I didn't fancy driving back from theirs in the early hours so at the last minute we changed our plans and he came to us.  We don't have a cot so we pushed a bed up against the wall so he couldn't fall out that side and then I slept beside him.  I'm not going to lie, it wasn't the most relaxing, refreshing night's sleep I've ever had, I kept waking and being aware of him being there and a couple of times he cried in his sleep as he changed position but he didn't actually properly wake up until 5.10.  Which sounds really early but apparently, he's never slept through from 8pm to then before so we all marked it down as a success!

Now, I believe that Sian is super busy learning exciting photography related things on a course and won't be hosting us today but let's all put our alarms on early to check her blog out first thing on Tuesday.  Or, if you don't like waking to an alarm clock, can I suggest borrowing someone's 8 month old child for the night?

We lead a very glamorous life over here in Deb's World.  I mean, how many other people can join in with Sian's Memos, Mail and Me posts by recording two bags of diamonds being delivered?  Oh yes, diamonds, dozens of them.  Real ones?  Sadly not but hopefully they'll look pretty scattered on the wedding tables. 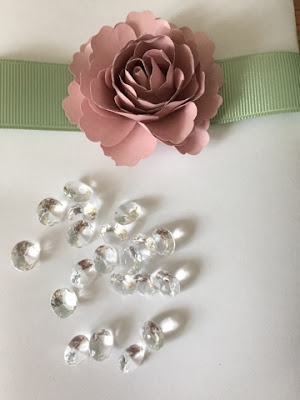 Talking of wedding tables, I'm now up to 60 paper flowers - the end is in sight! 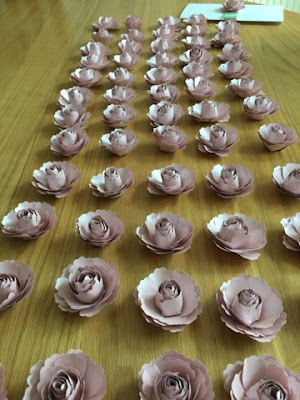 I've now resorted to making them while watching episodes of Grey's Anatomy from a DVD box set season 12.  I can make 3 per episode so only 5 more episodes to go!

A few other purchases have made their way into the house this week too.  Only three weeks until our holiday and I thought it was time I reviewed my summer clothes.  Some of those dresses have been in the wardrobe for far too long and are looking slightly dated and 'well worn'.  So I've been through everything, donated a fair few things to a charity shop and replaced a couple of bits.  It feels like you can date my clothes by their colours, I seem to have favourite colours each year, do you do that? I've just removed several pieces from my 'mauve' years, and I think that the next ones to go will be from the 'blue' stage!  So I am trying hard to buy things unlike anything else in my wardrobe for a bit of variety.

A new stage in our life is starting this week - the interim 'looking after Leo stage'.  R's maternity leave is coming to an end this month and she definitely didn't want to go back to commuting into London every day.  So she gave her CV to a company who got her the last local job she had and was sent the following day for an interview for a part time local PA job - and was offered it there and then.  Too good to be true, a reasonable salary, flexible hours, some working from home and 10 mins drive max to the office.  Only he needed someone to start now, and she hadn't got childcare set up, thinking she had time to arrange.

So for the next three weeks we are going to be doing a bit extra babysitting while she gets her childminder in place and negotiates the working from home day.  It's going to be different and I'm sure it's going to be tiring because he's a little bundle of mischief.

So by the time you are reading this, I'll probably be on my hands and knees chasing him around the lounge and trying to keep him out of trouble - Wish me luck!

There's definitely no excuse for not joining in with Sian's 'Memos Mail and Me' club this week.  In fact, a certain husband of mine stood at the front door with a pile of packages all addressed to me on Saturday and said the immortal words:

Have you been browsing eBay again? 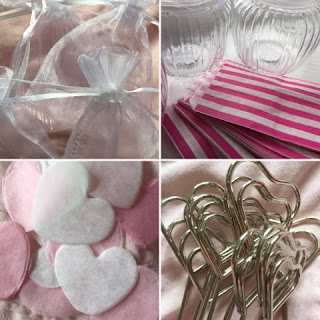 Because a wedding is rapidly approaching and when you're trying to do as much as you can yourself, 'things' have to be bought.  Lots of things.  And things that need to be crafted together in some way mean you need more than one thing in order to make the final thing.  I've lost you haven't I?

So, in order to answer his question, I have to admit that maybe it was a little bit more than just browsing ...

May I share Exhibit A.  Organza bags - will eventually hold wedding favours.  And have little tags attached to them with the bride and groom's names printed on them.
Exhibit B - candy striped sweet bags.  To go on the sweet trolley.  See those empty jars behind them?  They won't be empty forever.  Just wait until my husband discovers large boxes of sweets being delivered to him due to the fact that I accidentally ordered them from his Amazon account and not mine.  Oops!
Exhibit C - Confetti.   To go in the confetti cones that Denise is very kindly making for me.
Exhibit D - can you guess what these are?  That sounds a bit like a competition in a magazine doesn't it?  Little silver table number holders.

And so we take a step closer to the big day.  I now have a complete outfit, hat and all.  Flowers are ordered, suits have been bought, photographer booked.  I'm just wondering how foolish it was of me to offer to make the cake ...
Posted by debs14 at 11:25 7 comments: