The Beast from the East

Apparently we are about to be hit by some VERY cold weather.

The weather reports are full of it.  The more sensationalist newspapers are using it for their headlines (if you read some of them, you'd probably doubt you'll live to see the end of the week).  Our railway line has already decided to stop services at 10pm tonight and the first train out tomorrow will be 6am.

We've had a bit of snow - but just a bit.  And when you leave the house you can feel that the wind has a real bite to it.  Gritters are out on the roads already and it's not even 5pm yet.  I just checked my work email from home as I don't work Mondays and they are telling staff to check emails before leaving home to make sure the school will be open.

Now if I look outside I see this 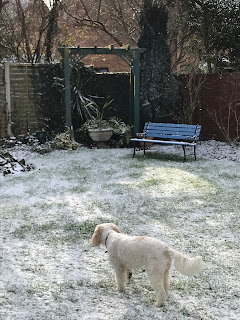 Not much snow to talk of eh?  And it seems hard to believe that road and rail is going to be hit dramatically in the next 12 hours.

But if we are feeling chilly at the moment, you have to feel a bit sorry for some visitors we have in school at the moment.  We have a partner school in Uganda and every year 2 or 3 teachers come over to see how things are in the UK and to meet the people who fundraise on their behalf.  They have never known temperatures so low.  'Low' for them is about 12 degrees Celsius and we have been in minus figures most of today with a low of -6 predicted tomorrow.  Apparently they are really struggling to keep warm at night, going to bed wearing nightclothes, dressing gowns, wrapped in a duvet and then a blanket over the top with hot wheat bags and hot water bottles.  I bet they can't wait to get home and feel warm again!

So, do you think I'll get a 'snow day' tomorrow?  Will we wake up to drifts of snow and ice on windscreens?  Will Coco get a normal half hour long dog walk in the morning?  Watch this space ...
Posted by debs14 at 17:14 5 comments:

Seven words I never expected to hear myself say

Not a sentence I would ever have expected to utter.  And certainly not the one my husband expected me to say when he came downstairs this morning.  You see, this virus has reared its ugly head again and I'd woken early - unable to breathe and with such a dry mouth that I gave up on getting back to sleep in bed and went downstairs.  Did that good old British thing that is guaranteed to make you feel better (made a cup of tea), snuggled under a quilt on the sofa, and switched the tv on.  There's not much on tv early on a Sunday normally but it's Winter Olympics time and it's on one channel or another at any time of day.  I'm not a huge Olympics fan but when you're under the weather you find yourself watching all kinds of stuff you wouldn't normally watch - often because you simply don't have the energy to find the remote control to change channels.

Well the women's curling competition was on and it was England v Sweden.  It was so close and it was all down to the last throw for each country.  Eve Muirhead took up her position, slid with the stone to the 'hogline' ... let go ... the stone started to travel along the ice ... and a red light shone to indicate a false throw.  Was it a malfunction in the stone?  Had she accidentally touched the handle after she'd let go?  Everyone looked shocked.  The official checked the stone over, walked to the start and slid it over the hogline.  Green lights.  Stone deemed to be functioning perfectly.  A no throw was decided, Sweden took their place and went on to win the last point. What a way to lose.  So sad.  When they showed the throw in slow motion, it seemed to flash green and then red, which may have meant a malfunction but we'll never know.  See what you think here.

Are you watching any of the Olympics?  I'm in total awe of what those skiers are able to achieve.  I've never been on a pair of skis in my life - even though we did have an artificial ski slope in the town in which I grew up - but I just know I wouldn't be very good at keeping upright.  And don't even get me started on the skeleton event.  Who on earth first decided it would be a good idea to launch themselves on a thin sledge and hurtle down an ice tunnel face down at 80 miles an hour?  How scary must that be?

Well, time for another paracetamol, and time to return to being an armchair athlete again!

February - a sentence a day

Lesley has shared a post on her blog here, detailing her month in the form of one sentence a day.  I have every good intention of joining in, but may have to break it down into smaller groups rather than 28 sentences at the end!  It makes me realise how much I waffle on, it's hard to get the day down in just one sentence.  Here's my February in sentences so far:

Day 1:Local social media is saturated by tales of traffic jams and the town being gridlocked - a quick look on the council's roadwork website may explain why. 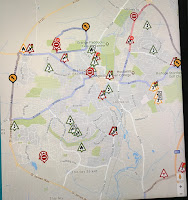 Day 2: You know you're not looking your best when your daughter turns up unexpectedly with her hairdressing kit and offers to give you a cut and colour.

Day 3: Woke up with a sore throat and the chills which gives me the perfect excuse to have a day sewing and binge watching my box set of season 13 Greys Anatomy.

Day4:  Daughter and her family came for the afternoon so my husband (Tottenham supporter) and son in law (Liverpool supporter) could watch the Tottenham v Liverpool game together; a 2:2 result meant there were no awkward silences when the final whistle blew.

Day 5:  I discovered {what I probably knew already} that it is impossible to go to Hobbycraft and only come home with the one item I went in for.  😝

Day 6: One of my workmates has written a play which was being performed at our local theatre so we had a 'works outing' in the evening to support her. 👏

Day 7: Dinner out with some ex-workmates - amazing I got there really as the pub was in a tiny remote village with no street lights and I have no sense of direction (or satnav)!

Day 8:  I try to kid myself I'm reasonably fit but three dances in at my Fitsteps class, I realise I'm not.

Day 9:  Four friends sharing a bottle or two of wine - next thing you know we've booked a weekend away to Bologna! 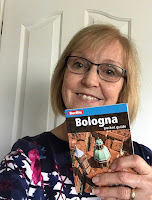 Day 10: I always have intentions to try something new when we go to our favourite local Turkish restaurant but as soon as the waitress comes to take our order I hear myself ordering what I always order - sigara borek to start and chicken shish for main - Yum!

My friend's daughter is going to be representing the United Kingdom in the Eurovision Song Contest in Lisbon!

Those who know me in 'real life' will know that whilst I don't live in a huge town, I live in an area which produces some pretty successful singers.  I'm sure even those who only know me through my blog will have heard of our most famous one - Sam Smith.

So I would like to introduce you today to someone who I have known since the day she was born; I have been friends with her mum since we met at NCT classes after the birth of our first children.  This young lady has been tipped for success since she was very young.  She has a true passion for music and dance, was the star pupil at the local dance school, and the lead voice in local choirs.  At the age of 16 she performed as Fantine in the London production of Les Miserables.

Since graduating from the Royal Academy of Music, she's been singing, performing and writing her own music but this year she has a new challenge in mind.  She's one of the potential contestants for Britain in Eurovision.  Now I'm not a huge Eurovision fan but I shall certainly be watching the BBC show on Wednesday where voting will begin for the public to choose our representative.  I think you can probably guess who will be getting my vote!

But don't take my word for how beautiful her voice is, check it out in the following link:


And if you like what you hear, please vote for SuRie on Wednesday!
Posted by debs14 at 08:24 2 comments:

I did something on Monday that I haven't done for 26 years.  Hmm, whatever could that be?

Before you start reaching your own conclusions I'll tell you.  But if you are my line manager at work, please look away now.

I booked a holiday - in term time.  Which means that now I have to resign! 😱. Because they give us 11 weeks holiday a year it means the school absolutely refuses to let you have any time off during term.  No swapping one week of the summer holidays for another one in the term.  The rules are there and there is no room for compromise.  Obviously when Rachel  and Jon started primary school we were restricted to school holidays and then I went to work at a school and even when both 'kids' were grown up, I was the reason why we couldn't book anything when it was cheaper and less crowded. 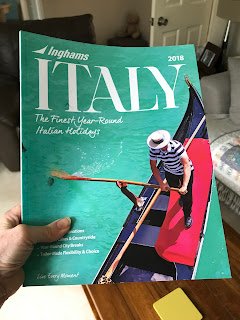 So, I now have a deadline - we go at the beginning of July so I have to resign by beginning of June at the latest.  Eek!  It's all becoming more real.  We will be going to Lake Garda in Italy and whilst we have been there before and I have a belief that you shouldn't return to the same place twice, we are going to the other side of the lake to where we went last time.  We will be staying at Desenzano del Garda.  It looks lovely and gives Paul ample opportunity for practising that Italian again.  It will also give me ample opportunity to remember how lovely it is to drink prosecco with every meal, (yes, they even offer it at breakfast) and eat my own body weight in pasta.  Which means my body weight will probably have doubled by the time we get home.

After such a happy start to the week, it ended at a dreadful low point.  We had some tragically sad news about one of our students and whilst it was not unexpected, it still shook the whole school community to the core.  I think all staff went home and hugged their children a little tighter than normal that night.  I know it sounds trite but it really does make you realise that nothing can be taken for granted and we really should not put off anything that we want to do.  So here's even more reasons for resigning and having time to go places and do things I've been talking about for ages.  I just need to get the courage up to start that conversation with my line manager ...