These Monday's are coming around quickly aren't they?
Here is a snap of what I was doing first thing this morning 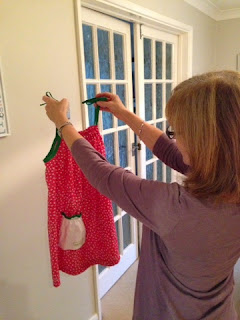 Remember the Dress a Girl around the World project I mentioned a while back? Well I made the body of the dress ages ago and it was just waiting for the pocket to be added and as we all know, it's the finishing off bits that get left behind until someone finds your UFO (unfinished object) and says "are you ever going to send that off?" So here I am, when my finished dress, ready to put it in a bag to hand over to the teacher in charge of the project - finally!
So, it was a busy old weekend here. Pockets were made, and sewn on, threads were snipped, rugby was watched, as was football, Indian take aways were eaten with friends, a few Christmas presents were bought, a new living room floor lamp was ordered, a moving around of furniture in the lounge was discussed, and hours of Internet searching took place to find a new chair to put in the space that the reshuffle would make, and finally much relief was felt when the voting on Strictly Come Dancing was announced.
Giving up a big wave to Sian whose idea it was to share our photos on Mondays.

Wisest observation of the week! yes, these Mondays are coming round very quickly indeed.

That little dress looks so lovely. I bet it will find a proud owner.

Some little girl is going to be thrilled with that dress!
Had to smile at your Strictly comment ...

Lol ... Oh yes I was happy with the strictly outcome too

I know just what you mean about finishing things off, as for Strictly it had to happen I suppose but I enjoyed watching Judy.

That's a lovely dress, it is so good to finish things finally!
Good lucky with the moving of furniture and chair buying. I love a change :)

sharing your relief re strictly and loving the dress

That's going to make some little girl's eyes sparkle when she holds it up and looks at it, just as you are doing here :). Am a little lost on the Strictly front but hoping you had time to enjoy it.