Scavenger hunt - from tents to toilets 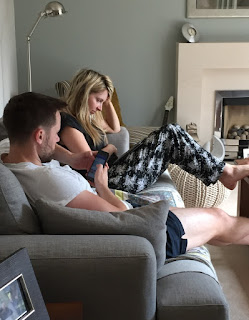 Daughter watching catch-up TV on her iPad and her partner sending a message on Whatsapp.  I bet there is no one taking part in the hunt who had trouble with this category - you can always find someone engrossed in their phone or a tablet!
9 - A tent 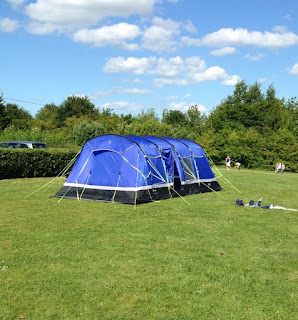 You never get anyone camping in the local park.  Never.  Well, unless you count the little canvas shelters that the fishermen over the lake use for night time fishing.  But quite randomly, one day on a dog walk we noticed that someone was practising putting up a tent.  It was literally only in this state for about half an hour - as if they knew I needed a photo!
10 - A college or university 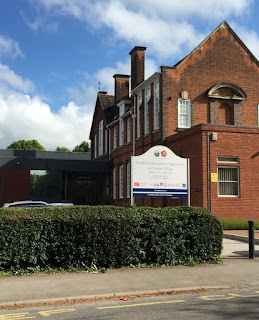 One of the easiest ones to get - as I work there! It felt like a bit of a cheat but I'm claiming it anyway.
11 - A cellular tower or television satellite dish 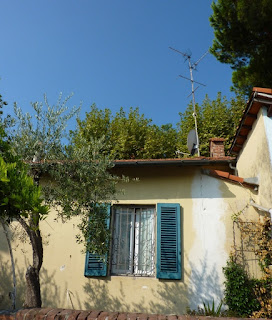 This was a really ramshackle house by the marina in Viareggio, it was a little unloved and one side of one of the walls had quite an elaborate graffiti painted on it.  It was definitely in need of a little TLC but I can definitely see a satellite dish up there on the rooftop aerial!
12 - A public restroom, bathroom or toilet 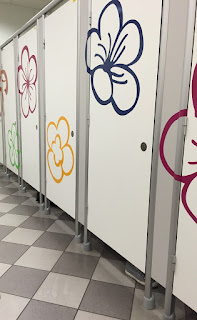 Oh Rinda - this was an odd one!  Ladies loos in England are notorious for their long queues to wait to use them so the chance of being able to photograph one in private was looking unlikely!  There are many things on a scavenger list that may cause raised eyebrows of those watching you take a photo of something obscure but a toilet?!  Plus the Ladies in our local shops and restaurants aren't really that photogenic - but look what I found at Pisa airport - pretty doors.  I tried to make it look like I was sending a text message while waiting in the queue but I'm pretty sure the lady next to me saw that I was actually using my camera.
13 - A merry go round or carousel 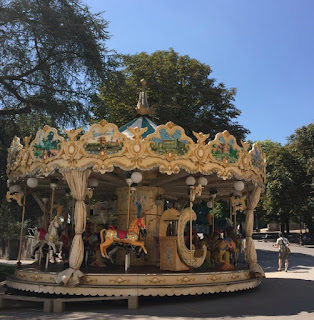 We had got the bus to go to Lucca for the day and our cameras were seeing a lot of action (Panoramic view from the top of a tower for example, not to mention some rather lovely door knockers).  The town is built within the confines of the ancient city wall and we were heading out of the town to photograph the actual wall.  I was more than a little bit tired after climbing the tower and Paul was walking ahead of me, suddenly he turned a corner and stopped.  'You won't believe what's round here' he said and as I walked to join him I saw this beautiful traditional carousel.  (You can tell he was well versed in what was left to get on the list can't you?) It really was strange to see it as it wasn't part of any other children's attractions, just this one random carousel going round in a street.  It was like the tent situation again - it's as if the Scavenger Hunt fairies knew I needed one!
14 - A traffic signal 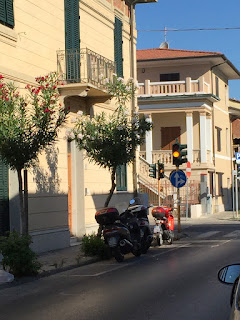 You can tell from the red Vespa parked along the road that this too was taken in Italy. I tried to find a sign that was very different to anything we have at home but it turns out that probably as we are part of Europe they have all been standardised.

So that's the second third of the list.  Numbers one to fourteen safely chosen and shared.  And you know what that means don't you?  The next one will be number fifteen - the elusive and much sought after flag pole.  I can hardly wait!

great toilet cubicle doors and yes that has been one for furtive phone capture. how sensible of those people to practice putting up their tent - as well as helpful for the hunt

Lines are long here too - at least in any place even remotely crowded! I was blessed to be alone in a small restaurant bathroom when the restaurant wasn't very busy.

These are excellent..but did you really get a flagpole? did you? Clever!

What an enjoyable post :). I smiled at your account of trying to take photos in the ladies' loo - yup, tricky! I like the ariel on the little painted house especially.

I would never have thought to practice putting up a tent in a park. Clever people

I had to laugh at your comment about social media. I had just about given up on that one! Not as common as one might imagine in my world.

I was impressed with the tent photo, and your uni photo was not a cheat. In the US, restaurants often have restrooms that are meant for only one person. So, there is no waiting and no chance someone else will see you taking a photo if you are the only person inside the room. Your choice was awesome, though. Your choice of titles was very clever, too.

What a gorgeous, ornate carousel! You have a LOT of great finds here!

Yes the toilet one is an interesting one to find. My daughter raised her eyebrows at me when I started snapping in the Ladies!

Great find on the tent, and it made me laugh to think of your husband spotting the random (and quit beautiful) carousel.
I love hosting the hunt!!!
Rinda

Great photos. I think you're right about the toilet. It is interesting. Have a grand day!