Me on a frosty Monday

Well the temperature certainly dropped this weekend and it's not much warmer today as I wave to Sian and her merry band of Mondayers. 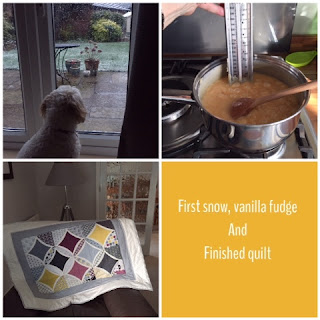 It was a Saturday where a light dusting of snow turned to torrential rain which dried up and let to a 'meh' kind of afternoon.   The kind of day that gives us Brits lots to talk about!

It was a Saturday evening of having our daughter and her boyfriend over for dinner as a farewell before they went off on holiday to Mauritius.  They didn't really get much of a holiday last year as although they had a relaxing week in my sister's holiday home in Portugal booked, Rachel got appendicitis 2 weeks before they were due to fly out.  Although they still got to go away, it was a very different type of holiday to that which they had planned - more of a convalescence!  So this year they decided to 'push the boat out'!  Lucky things.

It was a Sunday of waking up to the first real frost of the year, of finishing off that quilt, having a traditional Sunday roast and making a batch of vanilla fudge.  That was prompted in a most unusual way.  You see, at work I have been asking for ages if I could have a second monitor screen linked up to my computer.  It makes life so much easier if you are working with two documents at a time and despite the fact that we had two computers in our office not being used due to people leaving and not being replaced apparently it was not possible to 'borrow' one of the screens.  So I said to the Network Manager that if he arranged for me to have a 2nd monitor, I would give him some homemade vanilla fudge.  When I came back from lunch - I had two screens.  Who knew that homemade fudge could be a bartering tool?  Now what else do I need? ...
It was a Sunday of catching up on TV we had missed, of trying a new pudding recipe for dinner.  Individual panettone bread and butter puddings.  The husband reckons they were the best pudding I've ever made.  Which made me feel a little guilty as they were so easy to put together.  Just slice up half a panettone and cut into squares and fill two large ramekin dishes.  Make a custard with 2 eggs, caster sugar, vanilla extract and milk, then pour that over the panettone.  Leave to soak in for as long as it takes (half an hour?) then put in oven at 160 degrees for 15 - 20 mins.  Serve with a scoop of vanilla ice cream and sit back and wait for the compliments!
So here we are at Monday again - and another Monday off (must remember that I'm back in the old routine from next Monday onwards).  Paul suggested a  shopping trip to Cambridge so I was in my boots and coat with the car keys ready before he had time to change his mind.  It was pleasantly busy without being crowded and we got a few early Christmas presents so all was good.  I loved this sign by a small stall selling very fancy cupcakes: 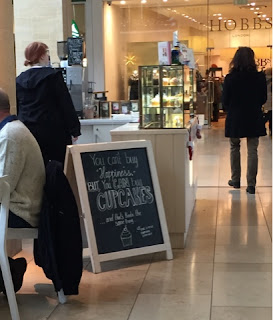 "You can't buy happiness, but you CAN buy cupcakes ...
and that's kinda the same thing"

Well it's freezing outside, which feels even colder when I look at the photo of the infinity pool by the beach that my daughter's boyfriend has just posted on Instagram.  How's Monday looking in your part of the world?

I have a little fantasy about sitting beside an infinity pool. Maybe some day! isn't there something that sounds so lovely about them?

Yes! It has so much colder! Though I suppose it is making it feel more Christmassy (still think Mauritius sounds like a good idea mind you).

Your fudge sounds fab. We love making fudge here too. last year we were fundraising for Romania by selling it. This year maybe we'll get to keep the lot.

Bartering with fudge - I like your currency. Sometimes the simplest of recipes are the yummiest - bread pudding is one of my favourites, especially eggnog B/P.

Your daughter's holiday sounds lovely. Now who could I bribe/persuade with a batch of fudge..... Hope you enjoyed your last Monday off.

I'm not a fan of fudge (following a childhood incident that involved a large bag of it and a boat journey) but I love the sound of your panettone bread pudding. Yum!

I love fudge but have never been brave enough to try and make it. I do make bread and butter pudding so will be bookmarking your recipe. Its a cold and wet Tuesday here, hope you've got better weather. Have a lovely week.

Our temperature dropped at the weekend too, and though it's not as cold as you're having, we still feel the difference...the boots and scarves are out! xx

I had brioche bread and butter pudding in a resturant and promptly went home to make it. I added Bailey's and chocolate pieces, and as you say, delicious and easy! I'll have to try with panettone, it is made in the same way.
Funny, I've not noticed the weather being that cold - I was on a retreat last weekend and it was wet and very windy without any sign of snow. Your daughter is lucky to be enjoying some warmth and sunshine, I think I've just been unobservant or too busy indoors to notice how dismal it is outside.