Remember those orphan squares?  Well, they've all been adopted now!  It's the best working day of the week for me.  Wednesday; the day I don't work at all.  So I brought the sewing machine back downstairs from where it had been tidied away over Christmas, got the iron out, put my new box set of Season 11 Grey's Anatomy on the TV and settled down for a morning of crafting.  It's been a productive time: 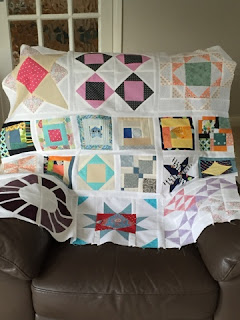 Now everything is in one piece and they are all part of the same family.  Like all families it's a bit of a melting pot of shapes, sizes and personalities.  Some that needed a bit of reshaping, some that were a little dominant and some that had obviously given me a lot of trouble in their younger days.
I've so enjoyed putting this together, happy memories of doing the squares for the Friendship Quilt; remembering who got which design.  Looking at those big squares that I literally put blood, sweat and tears into finishing.  They didn't deserve to be stuffed away in an old plastic bag, never to see the light of day!  Best of all, so far this quilt has cost nothing to make as I'd already made the squares and only need to sash them together.  I have a few off cuts of wadding that can be stitched together and used so all I need is backing fabric and edging and I'll be good to go.
FIFTY SHADES EPISODES OF GREY'S
Last year we changed our TV service provider and consequently I lost the channel that aired Grey's Anatomy.  I sulked a bit.  OK, I sulked a lot, especially when people put comments on Facebook as the season progressed.  The box set was the first thing I put on my Christmas list and this weekend I broke open the cellophane and settled down to resume where I had left off.  I already knew something really, really bad happens to one of the big characters so I am enjoying every minute of screen time that includes him as I know he won't be there to the bitter end.  I was going to restrict myself to one episode a week, like I would have in the good old days before we switched to BT Vision.  (I am still a little peeved.  You guessed?)  But today one episode, became two, became three, became four ... before I had the strength of will to press the 'stop' button.  This seems like a good season.  I just have to make the most of seeing McDreamy ...
SMILE PLEASE
Update on the dentist situation.  I 'fessed up to the potential broken tooth, which turns out to be a broken filling.  Good news.  Which needs to be repaired, which means another appointment in two week's time.  Bad news.  Very bad news.
OFF TARGET
On the subject of confessions, I need to admit that my Slimming World journey is going a bit off track.  I've been 'at target' for over a year now, and you're allowed to go either up or down 3lbs before you have to start paying for membership again.  I've hit that 3lbs up point and I need to give myself a good talking to and step away from the leftover Christmas chocolates.  Which, to be honest might be better in a dentist related way too!  So today I have been having a look through the magazine (no point buying it if I don't actually read it), made a batch of leek and potato soup, and prepared the next few days of on track meals.  And no chocolates.  Absolutely none.  Well maybe one.  Someone take them away ...

What a stunning quilt

The quilt is beautiful Deb! :)

I enjoyed this catch up on your news post. Guess what happened to me last night: I woke up in the middle of the night to find one of my crowns balanced on the tip of my tongue! Thank goodness I didn't swallow it, though I don't know how it came off when I wasn't even eating. So, um, yeah..dentists..

Wow. That looks fabulous! Such a happy quilt!

Love the quilt! Your GA confession made me smile....my Series 6 Downton Abbey DVDs arrived on Friday and I'd watched them all by Saturday night!...AND I'm back on SW.....good luck with the eating! Xx

This has been a lovely read, catching up on life with you :). I especially enjoyed your description of the making of the quilt and the blendied family you have created - it looks wonderfully colourful. Good luck with the dentist (not a favourite here either) and here's to a chocolate free week!