KEEPING IT IN THE FAMILY


Sian has suggested a variety to the Me on Monday theme, Memorandum Monday where we share snippets of something we have learnt over the weekend. Well, how fortunate then that one of my New Year good intentions was to tidy up the bits of left over fabric that I've collected since starting my quilt making.  Now, there is some debate over how small a scrap of fabric has to be before it needs to be thrown away and clearly at the beginning of my quilting journey, very tiny bits of fabric were kept 'just in case'.  Seriously, very tiny.  So with an air of ruthlessness and a growing rubbish bag, I gradually reduced the odds and ends of fabric, folded the remnants neatly ready for that moment when I just need to have a 2" square of peach coloured material.  (It could happen.) Maybe later in the year I'll go through that bag and increase the size that scraps need to be before they aren't kept. Or maybe I won't ...

At the bottom of a bag, I came across a batch of random 10" quilt squares that I had made at a time of much enthusiasm and great intentions.  The quilting magazine I subscribe to has a 'block of the month' to make and I vaguely remember thinking 'I can do that and in 12 months time I'll have enough to make a quilt'!  Hah!  I obviously only kept that up for 6 months.  The blocks got increasingly difficult and I was soon out of my comfort zone.
Then I came across a bunch of squares I had made during the Friendship Quilt project.  Every time I had a square to make, I first made a prototype to keep for myself.  So I had 12 of those, much smaller squares.  All in random colours (obviously had a penchant for leftover fabric even at that early stage of the game).
Now one of my neighbours is a brilliant quilter.  I watch Youtube videos from the Missouri Quilt Company, she goes out to Missouri and knows the ladies in the demonstrations.  Say no more.  So I sent her a photo of the random squares and asked her for suggestions what I could do with them.  She came straight back and told me that these little samples have a name.  They are known as 'orphan squares' as they are all on their own with no matching family to join with.
Well, that is obviously going to tug at the heart strings isn't it?  Little orphan squares. I had no idea that was what they were called and that, my fellow Memo Makers, is what I have learnt.  They aren't samples or prototypes or even unfinished projects, they are little orphans.  Which means of course that I now need to make them into one big happy family and join them together.  I reckon that with a bit of careful cutting and joining (and some heavy duty ironing, they have been folded away for AGES!)I can make one big block out of four little ones and use a bit of sashing to make this into a 'variety quilt'.  Or bearing in mind all those little 'orphans' maybe it should be the 'Adoption Quilt'. 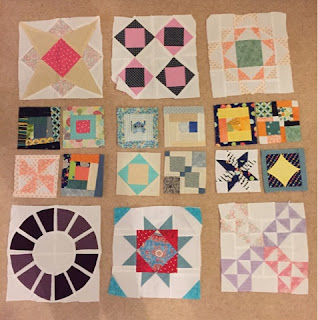 CAREFUL WITH THE HASHTAG


I saw that Rinda was joining in with the Liberate Your Art 2016 project where people exchange postcards of their art through Kat's blog. I enjoyed the Postcard Exchange that Sian organised and thought this would be fun too. (I inadvertently used the hashtag #sianspileofpostcardsexchange when I posted on instagram.  All I can say is that one should never use the word 'exchange' after a word that ends in 's' in a hashtag.)
While I am no artist, I have taken the odd photo I've been pleased with and have a few pictures of quilts I've made that I can share so in an impulsive moment I signed up.  Go check it out, it looks fun!  I've chosen some work to have made into postcards and when they arrive I'll decide which ones to send on.  I'll share more at another time.
DOWN IN THE MOUTH
I hope you are having a good Monday.  As for me, I only have a dentist appointment to look forward to this afternoon.  Those who know me will know that I worry so much about going to the dentist and this time I have to confess that I think a tiny bit of tooth may have broken off one of my back teeth.  Do I confess or wait for him to find it?  Oh the dilemma!  I hope you have more fun planned for your afternoon!

I'm delighted to learn something new about quilt making today. Your squares are beautiful! I haven't made any dolls clothes lately; but I used to nab any spare scraps going for curtains for my dolls house and tiny projects like that. I find it impossible to throw out scraps..I wonder what I could make with all my orphan paper?

Have a good week Deb. Good luck at the dentist

I hope [and am sure] that the dentist trip went well. I hope you take this how I intend it - but it's nice to know that other people who seem 'normal' also have things that unnerve them. Helps put my own concerns in context.

I think it's a great idea to garner all your orphans together. Like a history of your quilting all in one spot.

Have a great week.

Now that's a great piece of information to tuck away :). And your orphans will look lovely in a big family get-together.

your # story did male me laugh and lovely to see all your orphans our of the bag and waiting for the family creation. have a good week

I liked your term of being ruthless - yes that's what it takes to tidy out any bag, bin or box of hobby items & goodies. Well done you organizing the orphans. I am not very brave when it comes to the dentist either, I had my first teeth fillings last year & my husband had to come & hold my hand - plus they gave me gas to dull my edges.

I didn't know that. So glad the orphans will be part of one big family in a new quilt. I need to get my head around how to put my Friendship squares together. I have 3 which are quite a bit smaller than the rest and I haven't figured out the best way to approach this challenge yet! Have a great week Deb, once the dentist is out of the way.

Who knew about quilting orphans!?....I was just talking to one of my quilting friends today about actually getting around to doing something with my friendship squares.....I don't feel so bad looking at Fiona's comment!! Xx

When I gave up on quilting, I sent all my orphans to my mother. I bet I'll inherit them back some day... So happy to see all your little orphans being adopted!

They turned into a beautiful family :)