Monday, Monday, Monday.  How could one day pass so quickly?  Here I am, almost too late to join in Sian's Memorandum Monday.

I should have guessed it was going to be a frantic day when an epic SatNav fail affected my journey into work.  Not my mistaken turning, but one which caused a few problems.  You see, my very short journey to work takes me down a very narrow road which has the rather attractive name of 'Pig Lane'.  I always thought it might be because it is in the middle of farm land, maybe originally a pig farm?  Apparently during the war it was known as Pudding Lane.  There is a large manor set back from the road which was used as a maternity hospital, in particular single mother evacuees from London.  The girls would come to stay in a house in the centre of town, and then when the birth was imminent they would be moved to the manor house and the road which they travelled down got the nickname Pudding Lane as a play on the words 'in the pudding club'.  I digress.  This road is narrow, single track in some places and delays can be frequent when a large Range Rover comes head to head with another.  So imagine the chaos this morning when
a Stansted airport park and ride double 'bendy' bus went down there.  It must have been a new driver who did not know the area and was following the 'shortest possible route' to Stansted on a sat nav.  How he ended up there, I have no idead.  For a start the park and ride is nowhere near Pig Lane, and it certainly isn't the main route through to the airport!

So I sneaked into the office dead on 8.30 and tried to slip unnoticed into my chair.  'Aha, you're here' says the Head's PA, I know you've only just got here but could I have a word?'  As I searched my mind for anything dreadful I might have done, I couldn't find anything in my guilty conscience.  However it appeared that my plans for the morning were well and truly scuppered as our receptionist had resigned and left without working any notice.  Which naturally led to much speculation in the office for the rest of the morning.  Had anyone noticed she was unhappy?  Had she mentioned to anyone she was thinking about leaving?  No to all.  But it left us with a busy reception to man between us and consequently I got none of my own work done at all.

So what have I learnt today?  After a morning of frustrating commutes and unexpected workloads, the perfect antidote is a family afternoon walk in the countryside with a dog on one side and a baby on the other.  And the first true signs of Autumn, fallen leaves and shiny conkers. 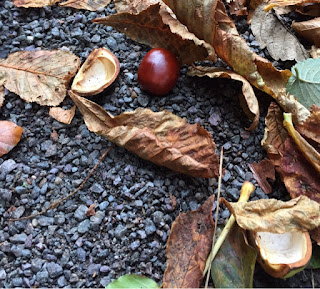 I hope everyone else had a slightly better start to their day!

There is always reports of someone running off into the river because their stat nav said turn here ... ha ha ha.

I know all about no one covering reception - yikes is it something in the air, something said on tv - quit, no notice ...

I like the end deep breath of your morning update - yes the conkers are falling everywhere & the squirrels cannot gather up quick enough. Happy week ahead.

A deep breath indeed ... and just imagine the joy in a few years when your grandson wants to go conkering with you!

Blimey! (as Uncle Dave would say)..that's worse than the start TNSSO had when she drove to her new house and met an oil lorry coming the wrong way up a one way street.

It must have been lovely out walking with the dog and the baby. I think I'll have one of each please :)

Wishing you a week which continues to improve

What a frazzling start to your week (and an interesting story about Pig/Pudding Lane). How soothing to have Nsture and a little one to nurture in your day :).

A morning of unwanted surprises for sure. Glad you had the afternoon to forget it in such good company.

Ugg, answering phones after a bad morning commute... no thanks! So lucky the afternoon was the right balm.