Lots to celebrate here this weekend.  Saturday was a good day because not only did England beat Ukraine 4-0 in the football but it was also the day that this young 'lady' turned 10. 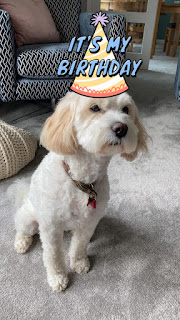 She spent the day doing all her favourite things, going for walks, sleeping, eating, patrolling the garden, barking at pigeons and the postman ... not to mention getting two new toys and some special chews.

Paul's art teacher had a stall at an arts and crafts exhibition in a nearby town on Sunday and we came home with a new picture for our lounge.  She's a very talented lady and it's nice to support a local artist.  However ... at 10.30pm last night Paul realised that he couldn't find his wallet anywhere.  We searched high and low, in all the obvious places and then all the ridiculous places that you wouldn't expect him to put his wallet.  After half an hour of searching it was apparent that he has lost it.  Fortunately he only had one credit card in there, his driving licence and a £10 note so it was easy to stop the card.  It hadn't been used and you would think that if it had been stolen someone would have been using it on lots of purchases that only need it to be presented to a hand held device so maybe it is 'just' lost. So his Monday will be starting with calls to the exhibition venue and the coffee shop he went to afterwards.

Wallet has been found!  In a totally random place, at home.  In between two children's jigsaw boxes in our spare bedroom.  How strange.  Especially as we didn't have the children here after we got back from the art exhibition so there was no reason for Paul, or his wallet, to be any where near the jigsaws.  But anyway - relief all round!

So, where do you find me on this particular Monday?  With a day to myself as Paul is out with a friend.  After his wallet searching calls that is.  They like to explore different places neither of them have been before and today's choice is a village called Clare in Suffolk.  I think it's about an hour's drive from here and although it's a very small village apparently there are some lovely long walks that start and end there.  I suspect that their day will start with a coffee and a hot sausage roll from a local bakery and end with a beer and a sandwich in a pub.  So much for the healthy walk in between the two!

I quite like having a day where I don't actually have anything planned.  I may pop into town to pick up a few bits and pieces for our trip to Southwold.  We need a new picnic blanket as I am sure we will be having a few al fresco lunches, hopefully on the beach.  Our old one is looking a bit tatty, I won it in a raffle many years ago and I think it's time to put it out to retirement!

I have a feeling that my fancy dress costume making skills may be called into action too.  On Friday Leo has a non uniform day where the theme is 'under the sea'.  I suspect there may be a lot of little girls in mermaid costumes!  Not so easy for a boy though.  He has decided (with a bit of suggestion from his mum) to be a scuba diver.  He is borrowing Paul's snorkel and mask and R will be spray painting some empty water bottles silver to be air tanks but there is the issue of how to attach them to something that will hold them onto his back.  We do have a plan which involves felt, a hot glue gun and the cord from an old backpack, but then there is the issue of flippers to go over his trainers.  Good old Pinterest!  Wish us luck!

OH, poor Paul loosing his wallet. That will be time consuming to cancel everything. I envy you having a day to yourself ... nothing to do, no one needing any thing; sounds like bliss to me.

I look forward to seeing photos of the finished scuba diver!!

What a pain for Paul to have mislaid/lost his wallet - fingers crossed that he finds it or someone hands it in.

I was never a fan of dress-up days in Primary School - I'll be interested in seeing how our scuba diver looks! :)

A scuba diver - too cute!! And so glad the wallet was found....but in the puzzles?! Very puzzling!:) Enjoy this day of leisure...sounds lovely!! Here's to a wonderful week ahead!

Gail Is This Mutton? said...

Happy birthday to Coco. She looks such a sweet dog. Glad the wallet turned up OK. I often panic that I've lost my purse and it would be awful because I keep everything in there! Interested in your trip to Southwold- it's on my list of places I'd like to visit.

Happy birthday to my favorite pup!! So glad she received the royal treatment on her special day. She is spoiled rotten, I think, but most deservedly.

Hope you will share the scuba costume you create. That sounds like quite the challenge to me. Of course, I don't sew on buttons if I can help it. So it would be a challenge. Hard to glue a costume together!! But I am sure you will figure out quite the clever look.

Glad the wallet turned up. Such a horrible feeling to realize you are missing your wallet, purse, ID. I ran in to buy kitty food and flowers for a friend at 6:00 am this morning before meeting her for breakfast. Rang up my items then realized I didn't have the right purse with me...UGH! Thank goodness, I had somehow grabbed my rattan bag (cause it's cute) and the purse that had the plastic and ID, both. Ran out to the car to get the right purse so I could pay for my stuff. Embarrassing way to start the day.