Another week begins, another Monday begins ... another crochet project begins 😊

It's hard to believe that there was a time when I didn't know how to crochet, and when my husband sees me with something new on my hook today I would like to predict that he may mention something along the lines of 'how many blankets do we need?'  What a question!  The answer will obviously be 'at least one more'!  My last blanket was a project to use up left over wool from previous blankets, so logically cost me nothing and it's become quite a decent size now and at a point where I could leave it as it is or add to it now and again. 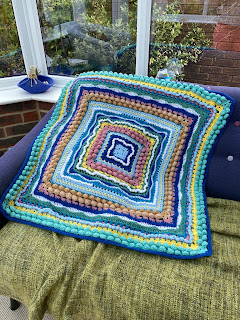 So whereas before I have used patterns that I have downloaded and worked at my own pace, this new one is a 'crochet-a-long' where one week of pattern is available at a time over a period of six weeks.  Will I be able to keep up?  I would like to think I might but it doesn't really matter if I fall behind, I'll get there in the end!  This one is different to my previous blankets in that I think you work on various blocks and then join them together at the end to make a whole blanket.  Lots of new stitches and techniques to learn I think so watch this space!

Last week was a break in our normal routine and we had no childcare days due to R not working on Tuesday and taking Rosie out for the day with a friend, and Max getting chicken pox.  So it was a week of a patio awning being fitted, a trip out to Cressing Temple, gardening, garden centres, afternoon teas with friends and ending with Sunday lunch at my cousin's house with my sister and brother in law.  All in all, it was a good week! While scrolling through Netflix for something to watch on Saturday night we came across  The Good Liar. Some big names appeared in it, with the main characters being Helen Mirren and Ian McKellar. Definitely worth watching!

Back to normal this week though, although my Zumba teacher is on holiday so I will have to find another way to get some exercise - and hour long extra dog walk maybe?

Have a good week!

I just love your blanket...and, truly, can there be too many?? I look forward to seeing how you keep up with the challenge. Have fun with it! I know someone who will really enjoy that extra exercise idea of yours!!:)

Your crochet project is so beautiful. Too many blankets, never! I'm sure keeping up with your Grandchildren will be lots of activity. :)

While I don't believe that you can have too many blankets, but I do have to ask this: where do you keep them all?

Gail Is This Mutton? said...

I actually need new blankets - one of mine was around when I was a child, so a bit shabby! Looking forward to seeing your patio awning. Have a good week.

Your new project is going to be so much fun. Can't wait to see it unfold!