There may have been tears

It's no secret that I am a proper softie when it comes to little children acting in a nativity concert.  Even if I don't know any of the children in the show, the minute the angels arrive dressed in their white dresses made of sheets and tinsel around their head I can feel my eyes welling up.  So you can imagine the lump in my throat last night when we went to see our grandson in his first nativity.

The restrictions of the last years are too numerous to mention, but children not being able to put on a special performance for their families at Christmas time was such a shame.  Nativity plays seem to be such a rite of passage of primary school.  So this year seemed extra special and I was looking forward to going just as much as I would have if I had tickets for a professional show.

It can't be easy to find a way to incorporate the 120 pupils in Years 1 and 2 into one show and I am full of admiration for the teachers who managed to organise 5 and 6 year olds into 45 minutes of performance! 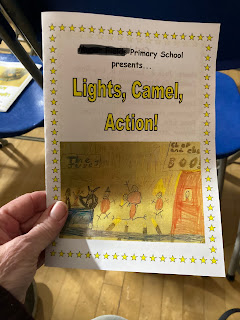 Of course there aren't enough characters in the traditional nativity story to cater for all those children so we were treated to Lights, Camel, Action! which also incorporated a 'Strictly Come Dancing' show from the Bethlehem Broadcasting Company (BBC).  Various characters from the nativity perform to celebrate Mary and Joseph arriving and the birth of baby Jesus.  We had the Nazareth Line Dancers, Funky Camel Dancers, Shepherds, Inkeeper and wife Tango dancers and of course the sparkly Disco Star-lets.

It wouldn't be a children's show if some of the characters didn't do a little impromptu performance, such as the compere who couldn't stop waving enthusiastically to his family in the audience while saying his lines, or the shepherd who couldn't resist doing a bit of 'keepy uppy' with his toy sheep as soon as he came on stage.  Our eyes were naturally on one of the hosts of the competition who looked very smart in his silver sequinned waistcoat and yes, there were tears in my eyes as he delivered his lines word perfect.

It's definitely made for a Feeling Festive Friday!

How marvelous for the children, parents & Grandparents to witness a newer version of the Naivety story. I think the teachers did a good job of "herding" 120 children on & off stage in correct order. I would pay good money to see Nazareth Line Dancers & sparkly Disco Star-lets. Well done Max.

Awww, it's always so touching being with little ones in a Nativity - and yours sounds like a stellar performance! Well done, Max :). You're looking very elegant in your evening dress, too - and what a lovely bathroom you've created. I think I'd smile every time I went in.

I absolutely loved those years with The Boy in the Nativity! I agree that the mere sight of little ones dressed as angels can bring on the tears ... utter magic!

Those are the best kinds of tears!