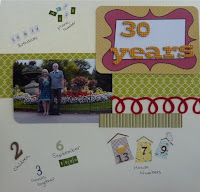 The prompt for using numbers was too good an opportunity to do what will be the last layout from our trip to Bath for our 30th Anniversary. Being such a big number, it was obvious to me that I had to use that for the basis of the layout! I thought of quite a few numbers I could have used but I didn't want to clutter up the page so have used the basics. I liked this idea for making a page where it is hard to think of journalling though and I can see that it would be a good layout to use in the future.
I appreciate that I have done this out of sequence and that the alphabet one should have come first but I was 'tweaking' the wording and then realised I had missed a letter out - doh!
Posted by debs14 at 21:00

Love that you have incorporated your house numbers on the little houses. Love this lo.

I commented on this on the forum but shall repeat myself here: I love the layout, congrats on your 30 years, and I can't believe that you've only lived in 3 houses in that time!! We moved 7 times in our first 7 years of marriage!!

Love what you've done here....I really like this 'numbers' idea....and will definately be using it in layouts.

Great layout Debs and congrats for 30 years together :)

love your take on this deb x

You have used the prompt so wekk Deb - I'm struggling with this one!