Me on a mid October Monday

I decided back in the summer that I was going to make my sister a quilt as her Christmas present.  Having bought fabric quite a while ago I decided on Saturday that it was finally time to take scissors to it and get sewing, because the longer I left it, the more likely it was that I'd never get round to doing it. 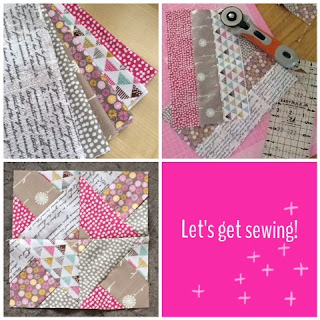 It felt good to have all the sewing equipment out again, although it naturally led to dinner being later than planned as time just flies when that sewing machine comes out!
My son offered to take his girlfriend's brother to look round the University of the South Bank on Saturday as he'll be applying to UCAS very soon.  Now, we knew that our surname Keyworth is also a place in Nottingham, but we didn't realise quite how famous we were in London too.  Not only is there a Keyworth Centre at the University but in order to get there you have to travel down here ... 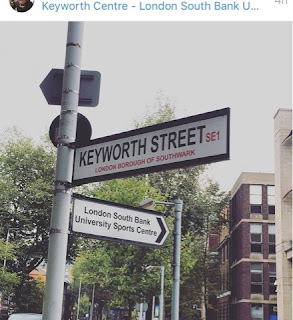 Mary Poppins may have had 'raindrops on roses and whiskers on kittens' but I also had a few of my favourite things going on Sunday morning.  Rediscovering my old faithful Simply Red Albums (yes I still remember ALL the words); Singing along to ALL the songs at the top of my voice {remind me never to apply for Britain's Got Talent} as I had the house to myself for a couple of hours; turning the blackberries we picked last week into a blackberry and apply crumble for lunch and getting a few more of those quilt blocks made 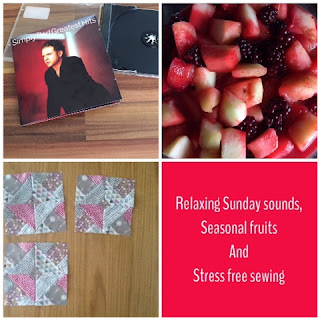 So where does that leave Me on Monday?  Well I'm waving frantically to Sian, who organised this meme and also taking advantage of the sunshine and taking the dog and the husband for a walk around the fields in the town where I grew up.  I mistakenly thought it might be muddy so was dressed in wellies which seriously hampered me in keeping up with them.  Once that dog gets the smell of rabbits in her nostrils, nothing will hold her back! 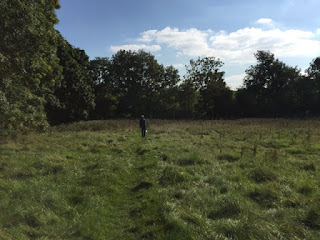 Before escaping to the great outdoors I had already worked my half day today.  Had a cheeky little smile to myself as I realised the importance of naming Excel spreadsheets appropriately.  Remember those aptitude tests from last week?  Well they happened on Saturday so this morning was spent co-ordinating all the results.  There were several parts to the sports tests: endurance, balance, speed, agility with large balls, accuracy with small balls etc.  I decided to name the sheets according to the teacher who had been responsible for scoring them, followed by a short term for the section of the test.  I was fine with 'Melanie - Balance', and 'Zoe - Endurance' but when I got to 'Richard - Small Balls' I had a little smirk and realised that this is how nicknames get started!  I'll never look at him in the same way again ;-)
Thank goodness I can pull myself together to find the new edition of my Quilting magazine had been delivered, perfect timing for a sit down and a cup of tea. Hope your Monday is equally relaxing! 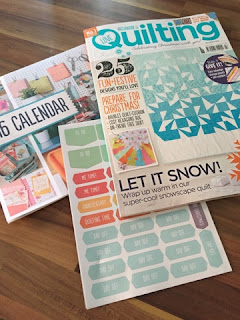 What does it say about me that I couldn't relate to your sewing or Simply Red ... but when I readhed Richard Small Balls [surely a Dickens character?] I had to stop and comment?

Everything looks like it's shaping up to be a cosy autumn at chez Keyworth. [Or should that be on Keyworth Street?].

I can relate to the sewing, the Simply Red, the blackberry crumble (though we think our berries were blackcurrants. No idea where they came from) and the University of the Southbank. Or the Polytechnic of same, as it was in the days when I once knew a boy who went there. He came home at Christmas and said it was brilliant and I never saw him again..

I love the idea of having your own street :)

The quilt is going to be beautiful: a wonderful present. Have a great week

My husband went to the Polytechnic of the Southbank. I wonder ...

Oh I hear you about the proper naming of Excel & Word documents - I have learned my lesson on that the hard way plus now I keep a written log! Well I am not a sewing type of crafter, I understand the hours flying by when engrossed into a project. Hope you have a great week.

Haha - love your Excel spreadsheet naming scheme. Made me laugh out loud which I totally needed today! LOVE the quilt colors for your sister and am excited to see the finished piece! Thanks for your lovely comment on my blog today, Deb. xo

Your file names made me laugh too. Now what does that say about your readership?! The quilt blocks are looking lovely. What a wonderful present for your sister. How cool to have your own street. I have a whole village, despite the lack of Scottish connections in the family! Have a great week Deb and thanks again for your support last Monday x

Poor Richard, may he never know lol Your sister is going to be thrilled with the quilt. Hope you are having a glorious week!

Well, you've made me smile :). And I can relate to Simply Red (especially as I've known one of them since they were in short trousers!). I was a bit alarmed by the cover of your Quilting magazine - I am none too eager to let it snow ... Hoping you have a happy week, keeping those spreadsheets in order.

Sounds like a lovely weekend and Monday! I love Simply Red too - one of the best live concerts we went to back in the 1980s!! Love your fabrics for the quilt. Popping in as part of my blog comment challenge 300 in 30 days.

Lovely weekend Debs - we haven't managed to scrump any blackberries this year, so any crumbles will have to be of bought fruit :(
Love the spreadsheet story. Good luck with the quilt x

Oh thanks for the chuckle on this early Monday morning - always nice to start the day with a laugh. The quilt colours look really great together. Hope you'll share the completed project with us.