Me on the Monday after the Friday before

I did not want to go into work this morning. It wasn't just the normal Monday morning blues.  Those who know me on Facebook will have seen that I had an atrocious day on Friday and came home seriously considering leaving. Without boring you, let's just say that a 26 column, 12 worksheet sized excel spreadsheet was involved, along with three mail merge letters. I came home from work so wound up, and as I came in the kitchen my husband casually said 'how was your day?' Which prompted me to start having a 'bit' of a rant which turned into tears of frustration and there was an obvious moment when I could see from his face that he realised this wasn't a normal reply that he could get away with not listening to properly, and that he needed to pay attention as clearly the words 'what do you think I should do?' were about to be said.  If I was built with a 'rewind' button, he would certainly have been skipping back a bit so he could see exactly where the conversation all started to go downhill!
Anyway I calmed down, moaned about it a lot, made a status update on Facebook and was so touched by the words of support I was sent online. My sister was so moved by people's comments she rang me up to say what a lovely bunch of friends I have!  But I still wasn't keen to return this morning, thank goodness I had a nice lunch with friends to look forward to when I finished my half day.
Me on Monday - a flat iron steak in a baguette with caramelised onions, two good friends to help put the world to rights, lots of laughs and gossip.  A perfect antidote to the horrendous Friday. 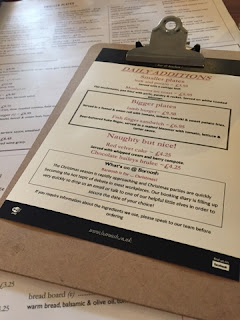 The weekend went by in a flash. 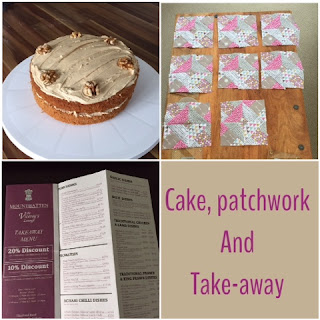 Saturday was spent baking and sewing, followed by an Indian take-away with a group of friends.  Very good therapy for the technically stressed.
Sunday was a 'having Grandma over for lunch' day.  My mother in law is a little very hard of hearing but is adamant she can hear a pin drop (she must have some particularly heavy, noisy pins) and refuses to wear her hearing aid. Anyone walking by the house must think we spent our afternoon shouting at her!  Sometimes she tries to second guess what we are going to say which leads to some rather interesting conversations where we are talking at total cross purposes.  Oh the joys of being 88. Our daughter went to a dog show at the Excel centre in London and came home with all manner of treats for Coco.  Including a rather smart bow.  It was supposed to be her Christmas outfit but she couldn't wait to try it on for size. 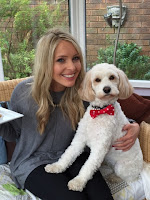 Giving a big wave to Sian who had the idea of Me on Monday.

There's certainly something to be said for being the usually stoic type because, crikey, people take you seriously when you occasionally lose the plot don't they?

Wishing you a better week ahead. And all the steak Coco will let you get away without sharing. x

Glad to hear the sun came out for you today after that awful Friday!
Rinda

I think Julie's onto something with the steak! My boy cooked himself a steak for dinner after we left him last Saturday and his week seemed to get better from thereon in. I know how they feel driving on that road to nowhere! I hope this week doesn't have a Friday in it like the last one :-)

There are a few of us on the planet who aren't thrilled to have to go back to work this morning! LOL. I hope your Monday went well. Good news for you is that you are just finishing yours, and mine is just beginning.

My grandma is one who doesn't like to wear her hearing aids and it is so frustrating to try to communicate. SHE ends up getting frustrated. ??? Wear the darn hearing aids!!! ;o)

Hang in there, my friend. xo

I am so glad your husband is the listening kind Debs - sometimes we need that opportunity to get it out rather than hold in. And good for you, looking after yourself and giving yourself company of friends and a nice lunch out today rather than being at work. Sometimes we need to put our own needs first.
As for your MIL - well I have a mum like that! She has tinitius and poor hearing so we have some interesting conversations, and yes, she half guesses too!
Look forward to seeing your quilt come together, and Coco does look cute in that bow tie! She is very spoilt, and why not!!
Go gently and do lots of nice things. You deserve it xx

Having girlfriends to vent with is the best thing in the world. My hubby will listen, but true to the male trait, he wants to fix things for me. Girlfriends let you vent out & I think it is often in the venting that we find the solutions ourselves, plus what better venue is there than friends & food. Hope your week is a lot better than last Friday.

I think Julie has summed it up best. I've been thinking about you all weekend and am glad you have Monday out of the way.

Sending warm wishes your way and hoping your week ahead is much better. I and some colleagues are on strike tomorrow over working conditions (not something I EVER imagined myself doing but sometimes you have to say NO).
Coco looks so fab in the outfit - love it!

Hope the work week is a little better - half term next week :0) Coco looks very dashing in her new bow. Have been looking for a suitable Christmas outfit for Kiera but not decided yet. She is more of a hat girl.

Oh, I am so sorry tp hear this. Not being a FB-er I hadn't known anything was wrong, so I'm sorry my good thoughts are being sent a little late. I hope it improves..

Yes! My Mum is like that. She tries to pretend that she has heard us so sometimes her answers don't match out questions.

I'm wishin you all the best for this week. As Sandie says: do nice things!

Hope your week at work is back to normal after the horrendous Friday. My Nanna bought those super heavy pins too!!! and wrongly guessed sentence endings.

Hope your working week is better this week...loving the bow tie ...Kirsty is knitting Boo a Christmas jumper she tells me xx

Glad to hear this week is starting out much better than last week ended, hope it continues to improve. Lunches out are always good - especially with girlfriends! Oh dear, I loved your comment about heavy, noisy pins - gave me a good chuckle because I grew up with a hard of hearing father and it got worse as the years went on. I can so relate to the shouting and the misguessed sentences/questions. Hope this working week has been a good one.