Me on the Monday before Christmas 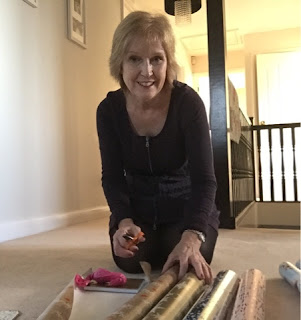 Wrapping those last presents.  You know the ones.  The ones you bought long before the proper Christmas shopping started.  The ones you put in a safe place that no one would think of looking.  The ones you find quite by chance when looking for that pashmina with the gold threads that you need to wear to a meal out.  (The pashmina that you wore only two evenings earlier to your work party and which now seems to have disappeared off the face of the earth.)  Do you have a certain place you do your present wrapping?  Mine is at the top of the stairs on the landing outside the spare bedroom. It kills your knees after a while and I'm not sure it's ever so good for your back but it's convenient and means that you can have a break at any time without anyone saying 'you need to move that lot away if we're going to eat dinner at the table'
So while giving a big Monday wave to Sian and the rest of the Monday crew, I'll bring you up to speed on the weekend.
When Rachel rang the vet back she said that obviously there was no point in taking her in, unless it happened again later that day, but it should probably be checked out to see if there was any obvious cause, they need to rule out a seizure even though there were no other symptoms of that.  So guess where I'm going later?  Yes, got it in one, Coco and I are going for a little trip to the vets for her to be looked over.  I'm getting too old for such drama first thing on a Sunday morning especially when I'm feeling a little fragile!
I know that everyone is going to be having a busy week ahead, I have a dozen lists for all manner of things but when you're catering for 14 people aged between 3 and 88, one with a nut allergy and one coeliac, organisation is key!
Right, the sellotape and wrapping paper is calling me back.  Have a brilliant Christmas; rest, relax and enjoy yourselves!  Looking forward to cruising around blogland seeing what everyone else is up to!

oh my, hope Coco gets the all clear at the vet

Well, I hope there's not another dramatic episode like that one. Merry Christmas!

I do my wrapping on a pull-out desk in the living room [the paper's on the desk ... not me ... that would be asking for trouble!] and - as it's on wheels - I can manoeuvre it in front of the TV and watch mindless Christmas films at the same time. Win win.

Your gold wrapping paper looks a treat. Glad that Coco was able to sort herself out, maybe it was a leg cramp & hoping that when the vet checks her out he/she finds nothing (although you think to yourself, cost, time ...). Hope all your festivities are joyful.

Wrapping presents is the one thing I hate about christmas!!

Every year I plan to 'wrap as I buy' - every year I end up doing it all Christmas Eve! Hope all was well at the vets. Have a wonderful Christmas.

I'm keeping my fingers crossed that she is alright. What a nasty shock!

I need to do some more wrapping today. But I have a feeling that when I go to find the paper I'll discover that someone (or two) will have taken their gifts out of their suitcases and used my paper to wrap them up..

Enjoy your break Deb! And thanks for all the Monday-ing all year x

A lovely photo of you! I always find the floor best for present wrapping too (though I might need some two-handed help this year). Golly, that was indeed a drama - glad all seems to be resolved and crossing fingers for an uneventful and happy Christmas for you all.

Hope Coco is fine! I wrap at a counter height table. Can't do the floor thing anymore - too killer on the back and knees!

Hope Coco's ok...I have a bit of a poorly dog here tonight...am hoping for an improvement by morning.
Hope you've had a lovely Christmas and lovely news about Rachel's engagement xx

Gosh I can sense your feeling of helplessness when Coco couldn't stand, hope she has had no further problems. It must have been a scary moment.
You sound super organised but catering for so many, you need to be. Hope it all went smoothly and that you had a wonderful time xx