My Month in Numbers

So, the suitcases are down out of the loft and we're ready to pack up 2015 and send it on its way ready for the arrival of 2016.  It's been a while since I joined in with Julie's Month in Numbers, but like Arnold Schwarzenegger in The Terminator, I said 'I'll be back' so here I am.  I am a bit of an arithmaphobe so numbers don't necessarily come naturally to me but I always enjoy reading other people's MMIN posts so here I am, joining in again.
✪✪✪ 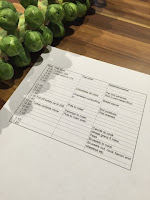 [Apologies to those fellow 'evil baby cabbage' haters for the inclusion of sprouts in this photo.  Apparently just because I don't like them isn't justification for denying others the 'pleasure' of having them with their dinner.] 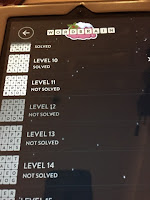 So that's it, December over and done with.  2015 over and done with.  It's been the usual mix of happy times, anxious times, tiring times, relaxing holiday times but overall it's been a very good year and I hope that yours has been too.  Another year of blogging with you lovely people, sharing tales, inspiration and crafty creations.  Is everyone ready to start it all over again next year/tomorrow? Me too!  See you in 2016 x

As much as I love you Deb I'm afraid I can't say I'm surprised that anyone who has a Christmas prep spreadsheet is also healthily competitive! [I wouldn't want to be shown up for having a brain less than the size of 2736 ... that would be embarrassing ...].

Thank you for joining my number tale-telling ... and thank you for your company all year, all over the internet. It means a lot to me.

I've popped you on the MinN board now https://www.pinterest.com/notesonpaper/my-month-in-numbers/

Wishing you and yours a wonderful new year! x

I have never heard of Wordbrain and am a little afraid to click through and find out! That's a very elegant hand and ring - did she manage to keep the happy news from you until she got home? Admiring your organisation! Especially holding a glass of something :). Sending warmest regards for a happy 2016.

All that dancing and partying makes me feel tired just by reading about it Deb! Sounds like you had a great Christmas and well done being so organised and hosting dinner for 14. I love wordgames, dare I check out Wordbrain? I bought my husband a cross word book and might sneak a puzzle or two when he's not peeking!
Wishing you a very happy New Year. Thank you for visiting my blog and look forward to sharing more with you in 2016. Cheers!

I am trying to forget that you mentioned a new word game...I am another one who loves them!It sounds as though you have had a busy but fun Christmas...looking forward to seeing what 2016 holds for you xx

I'm glad you had a good Christmas: is next year a really big one, then? are we going to be reading about lots of wedding plans?

Wishing all of you good things in 2016. Happy New Year!

Sounds like you had a really busy December especially all those people to feed on Christmas day. Hope 2016 brings you all you wish for yourself. I may well be asking for help next year as Eileen and I have decided to embark on a block a month quilting project!

How exciting! What is the project? Maybe I 'need' to join in too! Is there a web link?

Happy New Year to you and yours Deb and thanks for all your comments throughout the last year. Looks like there will be exciting plans ahead in 2016.

A wonderful December round up!
Happy New Year to you.
Rinda