Once again, I feel that there is something a little spooky going on here Shimelle! Let me explain:My perfect present was one that was given to my by my daughter in 2006. She booked tickets for us to go and see George Michael in concert at Wembley. I have loved GMs music since the early days of Wham and as he had stopped touring some years ago, never thought I would get the opportunity to see him sing live. She had to give me it early as the concert was before Christmas and she was so excited to see my face as she handed over the present as she just knew how thrilled I would be. I think she had almost as much pleasure knowing how happy it would make me as I did when I realised what the present was! This story is written on the hidden journalling on the tag behind the ticket.
But now the spooky part - this prompt came to us on 17th December and the date that my ticket was for was ...... 17 December 2006.Come on Shimelle, how did you know????
! 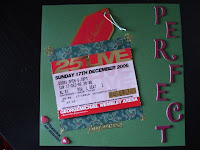 if i *told* you, i'd be giving all my secrets away!

so glad you are enjoying the project. :)

Thought you might like to know that there's a prize waiting for you from my blog - I just got my 500th new visitor and randomly chose a comment... ta da! I'll message thru Shimelle.com...