It was a dark and stormy night ...

... from inside the building they could hear the torrential rain lashing against the windows and the wind howling outside.  It had been dark for some time and the temperatures had dropped considerably.  Even so, it was far, far warmer inside than out and just the sounds of the horrific weather was enough to chill you to the bone.  The trees in the area just outside of where they were sheltering creaked as the force of the gale hit them and when the noise of the gusts dropped they could hear branches snapping and falling to the ground.  Even without looking outside, they knew that there was much debris accumulating around them and in the morning the landscape would look quite different to when they had last seen it in daylight.
A rumble of thunder in the distance was becoming noisier as the storm travelled ever closer.  The lightening increased in intensity as the storm approached.  A flicker of the lights brought a scream from the youngest of them and sent the older woman into another room to search for candles and a lighter in anticipation of an inevitable power cut.  It was bad enough being inside listening to the storm with lights on; to be plunged into darkness would heighten their anxiety and preparation was key to survival.
As the minutes clicked by on the clock, they knew that soon a decision would have to be made.  They had a mission to complete and failure would lead to consequences which none of them wished to contemplate.  Things could get very messy indeed.
But who would take responsibility for the mission?  Each had their strengths and each had their weaknesses.  This was going to have to be a stealth mission.  The deed needed to be done and then they had to return to the sanctuary of their current safe place.  They looked from one to another, each hoping that someone else would offer to take the role of leader.  They looked at the unwilling participant without whose co-operation the mission could not be completed successfully.  Their look of trepidation was mirrored in her eyes.  Was she ready for such activity?  Could she complete the mission and return unscathed?  Only time would tell.
All eyes fell on the elder man.  He knew it was time to step forward and be a hero.  He locked eyes with their co-conspirator.  They moved to the hallway where they found the protective clothing they had prepared earlier.  The man knew that his safety depended on this, without it he would be exposed to the elements and make his task much, much harder.  When he was completely covered, he turned his attention to the person responsible for this mission.  Without whom he would be comfortably seated in his armchair at home. 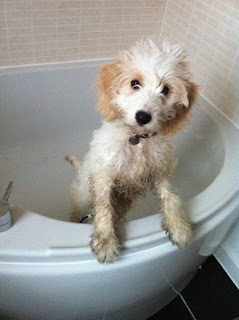 Yes, there are times when NO ONE wants to be responsible for the last dog walk of the day and pre-bedtime 'comfort breaks' have to be made. Neither do they want to have to be the one to clean and dry her on her return ...


Now pop on over to Sian's blog for some more Storytelling Sunday entries!
Posted by debs14 at 08:51

Excellent Deb - very funny indeed, though, I am sure none of you think so when it is your turn to escort the puppy on those dark wintry nights!

Ooooh lovely suspense and then a cute puppy shot! Wookie was always the one to take the dog out here too, which he felt was unfair as it was definitely not his dog :)

Very funny,Deb....in our house one dog's owner denies she's ever seen the dog before when it comes to dog walking!!

That's made me smile! Clever story - almost a shaggy dog one!

Who knew dog walking could be so precarious? What a great build up to a fantastic story.

Very funny! It really struck a chord here this morning as we have been tentatively talking about dog ownership and the pros and cons. Looking out at the rain this morning, I can see the disadvantages..

You always havve a great knack for raising a smile Deb. Thanks for this one!

Very funny and so so true :)

I couldn't wait to see where this was headed :) Beautifully told, Deb!

Very funny and so beautifully told. I have been 'the one' in our house, who knew a dogs paws could hold soooo much water.

Wonderfully told story. Also, one I can totally identify with ;-)

Oh my ! One more reason not to own a dog... suddenly my cats are looking pretty low-maintenance!

LOL! In our case it was persuading the dog to go outside in the first place. She took one look at the storm & decided she could hold it.

Wonderfully told Deb...I was totally intrigued all the way through!
Alison xx

You set the scene brilliantly!
And that last photo is so adorable!
Rinda

a well told story that wasn't quite as scary as i thought it was going to be!

Oh bless! what a gorgeous puppy.

That was terrific!!! I loved it. I bet the poor pup was more terrified of the storm than anyone else. Our beagle HATES the rain. He will sit at the edge of the patio busting to go, but he will try to wait out the rain. There are times when it has been impossible for him to wait and then he dashes out, does his business, and bolts back to the safety of the house!