It's been a busy week for Leo, and a tiring one for me, since I last wrote a blog post.

Most importantly, he's had a birthday party.  His first 'proper' party with all his school friends instead of family.  Rachel hired a hall, booked a bouncy castle completely decorated in superheroes, and arranged for a magician.  It was wonderful to see his happy little face.  Thirty six five year olds, with assorted siblings, can you imagine the noise?  Instead of one big cake with a candle to blow out, Rachel decided for all the children to have their own individual cake rather than a slice of a large one - more Covid friendly, I mean how many potential germs can a five year old share while blowing out a candle?  So that was my job on Friday, I baked four dozen cupcakes and then handed them over to be decorated. 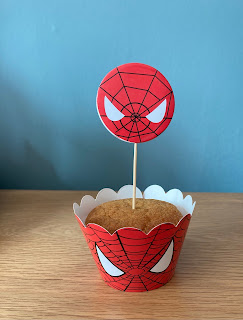 You will have to imagine a swirl of icing on top of the cake, I forgot to take a photo before the children were allowed to dive in and eat them! 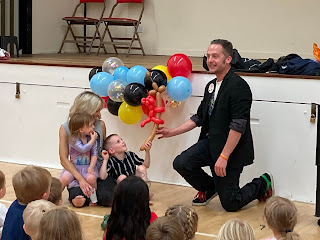 The magician was so good and every single child went home with their own balloon animal - Leo chose a monkey climbing a tree.

At the end of the party, we helped clear up, came home and an hour and a half later four friends came over for a Curry Night.  Luckily we had ordered the food before we went out to the party so had to just sit down and chill before they arrived.  They stayed until almost midnight, we loaded the dishwasher and went to bed, it had been a very busy day.

I'd like to say I slept like a baby that night.  Actually I did, but like a newborn I was sound asleep for four hours and then awake for much of the next four!  The thunder.  The lightening.  The rain lashing against our windows.  Somehow Paul slept through it but once awake, I could not get back to sleep.  So it was no surprise when I fell asleep for an hour and a half after Sunday lunch was it?

We finally made it to the zoo with Leo and Rosie on Tuesday, and had a really lovely day.  We went to a zoo we hadn't been to before and were so impressed.  The animals had lots of space and they have many conservation projects ongoing.  After a morning looking at the wild animals, we had our picnic lunch and then went to the other half of the zoo.  The world of dinosaurs. Huge animatronic beasts, set in a woodland area.  I think they were a little larger and a lot noisier than Leo was expecting and boy did they look authentic!

Also, I finally got my new glasses.  They had tweaked my prescription and this time I was able to see just fine. 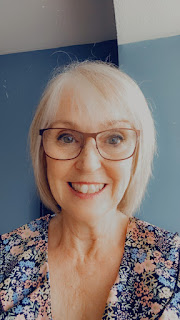 So how is this coming week looking? Well, Paul is out with a friend today so I have plans to make a birthday cake for Rachel's birthday tomorrow and crack on with a new crochet project.  This one's going to be a LOT smaller than my previous ones!

Lots of babysitting on the horizon - tomorrow for Rachel when she goes out for a meal with James in the evening, Max during the day on Wednesday and again for Rachel Saturday evening while they go to to a wedding reception.  All good practice for the following week when we have several nights of sleepovers - I need to start taking extra vitamins now!

Yeah to a return to birthday parties & it looks like this one was a great success. Lots of Grannie duties coming up which I know you will enjoy. I like Rachel's idea for the individual children's cupcakes.

Crikey, you really are a hands-on Granny - the best kind! How lovely that children's birthday parties are allowed again and what a great idea to have individual cakes. :)

I think traditional birthday cakes are a thing of the past--or at least blowing out candles on them. Cupcakes are really better suited for parties. This is a party that Leo will always remember. Love your new glasses too! They just go perfect with your hairstyle.

You look wonderful in those glasses! Must be great now that you can see perfectly through them. What a busy, busy time you've been having, but it sounds as if it was full of enjoyment and family togetherness. Hoping those vitamins are gearing you up for the next slice of life :).