Going back to my youth

This weekend has been like stepping back into the 60s and 70s but not in a pleasant way.

We woke on Saturday to discover that our central heating had broken.  I can usually guess what time it is by the amount of daylight coming through the blinds and feeling the radiators to see if the heating has switched on but that morning, the radiators were stone cold even though the sun had definitely risen.

Of course, being a Saturday the offices of the company that installed our boiler were closed and the guy who services it for us was on a weekend away.  We called the company with whom we have household insurance and it seems that we have cover for such an eventuality but although they assured us we would hear from an engineer within 24 hours, at the time of typing this 23 hours have passed!

But it hasn't been as bad as I thought it would be, even though temperatures outside are averaging about 5 degrees, at least it isn't snowing ⛄

The reason it is like stepping back in time is because I grew up in a house built in the 50s when houses did not have central heating.  We had a coal fire in the living room which had a boiler behind it which heated the water and that was our only source of heat.  Double glazing?  That was still many years to come.  We had single glazed, metal framed windows and in the winter, they would be frozen on the inside as well as the outside!  The bathroom had a heater which was part of the ceiling light so the first person to wake in the morning put the heater on so we had a nice warm bathroom to get washed and dressed in.  I don't honestly remember ever being really cold though!

So we channeled our inner 60s childhood, lit the gas fire in the lounge and brought in the small electric radiator we keep in the conservatory to heat just one room nicely.  Water bottles put in our bed half an hour before bedtime and of course wearing lots of warm layers.  This was also a time when enjoying yarn related crafts come into its own.  I knew those three blankets I crocheted during lockdown would come in useful - and there's nothing quite so warm as a pair of hand knitted socks!

Of course I don't need to tell you who was in prime position in front of the fire do I? 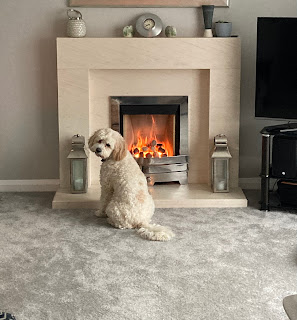 The other eventful thing that happened on Saturday was that the alarm went off on my car.  For no reason whatsoever.  Not only that but it wouldn't switch off!  I called out the Mini Assistance company and the engineer located the problem which was in the unit which houses the rear view mirror.  He opened it up, shut things off, switched them back on again and all was silent.  Kind of the car's equivalent of turning a computer off and then on again I guess.  Five minutes after he drove away - the alarm started again (my neighbours must hate me!) I managed to call him back and he said that there may be either a software issue or a part may need to be replaced but either way it needed to be checked out at the service department of the garage.  So that's where my little Mini is now, probably annoying the life out of anyone who lives nearby the workshop.

I'm hoping for a less eventful, warmer week ahead!

I do hope the boiler man has been by now! I also grew up in a house without central heating and double glazing - I also remember ice on the inside of windows and waking up with blue toenails because my feet were so cold!

Oh I grew up in a house that was 100 years old, but at least central heating was added before I was born. However, the drafty windows meant that it wasn't nearly sufficient. I recall my parents would shut off the vents in the bedrooms most of the day to make sure the most heat was going to the kitchen and living rooms. We sure lucky that things have been modernized, aren't we. Although we may not feel that way when the power bill arrives.

Let's all give a collective sigh for central heating (when it works). I do hope that this problem with the furnace has been sorted & not too expensively either. Let's also hope that the mini's alarm has been sorted. No chance of kids playing about purposely lifting the door handle to make the alarm go off? It's the 2022 version of "nicky nicky nine doors"

This takes me back too!! We didnt have central heating till I was in secondary school & our kitchen was the warmest room in the house! Hot water bottles were standard (I still have one to this day...old habits die hard!!) & bath day was Sunday when Dad turned on the immersion heater, the rest if the week if you wanted hot water, you boiled a kettle!! But we didn't feel hard done by...everyone scraped the inside of the windows then!!! LOL Hope your little min-bin is soon sorted...so much tech in cars these days there's no chance of sorting it out yourself! Have a great week xxx

Okay, the first thing I had to do when I read this post was to figure out what 5 degrees meant. At first I thought--there's no way you could stay in your house if it was that cold! Then I remember that you might be referring to celsius. So, I looked up the conversion--41 degrees Fahrenheit. That's definitely chilly. You definitely made the most of it! Glad to hear you managed to stay warm!

Oh my goodness, you've stirred up some memories for us all, Deb! Yep, frost patterns on the inside of the windows, cold lino under your feet except for the rug by the bed, and my Dad trekking in and out with buckets of coal ... Hoping it's all fine and cosy now in your house. We had rubber hot water bottles but also some old stone ones from my Grandmother's house - they stayed warm longer :).