I've brought forward my 'Me on ...' post because I think Monday is going to be quite unlike any other.

How things have changed since my last post.  England appears to be centre stage in the world's media and there is a real feeling of living through a period of historical moments.  It has been fascinating to watch the pageantry of such a momentous period of time, and one cannot but admire the organisation of such ceremonies.  I have no anecdotes of meeting a member of the Royal family and I have never been present at an event where the Queen was attending.  I am sad that she has died, and my sympathies go out to her family who, in the midst of grief, are having to be seen to be doing their duties in the public eye.  Anyone who has lost a loved family member knows that there are times when you just want to closet yourself away and hide from everyone while you weep.  They do not have that option.  She was an amazing woman.  To have taken on the role of Queen when she was least expecting it; to have to alter her life plans so dramatically when she was still so young and to take on the role at a time when it really was still a male driven world.  But I am pleased that as well as having lived a good life, she had a good death too.  We have seen photos of her smiling and healthy just two days before she died and that is so fortunate.  She died in the place she loved most, Balmoral, and she had family members with her up until the end.  For that we must be grateful.

Whilst all this is going on, of course life continues and it this week held some unexpected aspects for us too.  We won't dwell too long on the gastroenteritis which struck me in the early hours of Friday.  Despite no one else in the family having it and having eaten nothing different to Paul in the 24 hours before, it just hit me.  Let's move on!

Paul had his Covid booster.  He is a volunteer NHS worker and was scheduled to do a shift directing people who had been called for their boosters at a local clinic.  At the end of the day there were vaccines left over and so they asked the volunteers if they wanted to be jabbed. That was an unexpected bonus.

The most unusual thing that happened in the family was that our daughter climbed Mt Snowdon in Wales.  No, she isn't a keen climber or hiker.  No, she didn't do ANY training beforehand.  No, she didn't wear any specialist warm clothing and yet, Yes, she made it to the summit!  It was part of a team building exercise with the directors of the company that she works for.  Just her and five men.  What an achievement!  I think it was harder going than she anticipated (she had done the Three Peaks Challenge about 10 years ago and I think she expected it to be similar to that) and certainly colder and worse visibility than she thought.  But lovely views from the top! 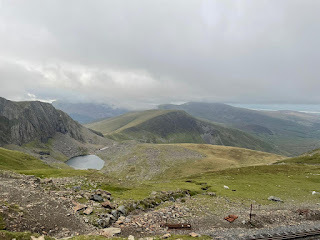 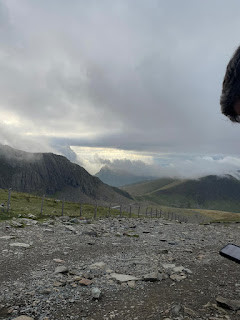 Let's finish with something that was expected.  I started a new blanket.  I knew that my crochet hooks wouldn't stay idle for long!  This is a Christmas inspired one and I have to say that it is a little more challenging with a lot of mosaic work.  Being confined to the sofa on Friday has meant that I have been able to get going on the snowflake panel without interruptions. I am sure that many of us will be watching the Queen's funeral on Monday.  Viewing the ceremony and traditions that make our country what it is.  The end of one era and the beginning of another.
Posted by debs14 at 11:09

Deb that new Christmas quilt looks like a big project. Well done to your daughter for that climb up Mt Snowdon, & what views! I am glad to hear that your tummy bug has passed.

I think for those of you in Britain & us within the Commonwealth, Monday's funeral was a beautiful tribute to Her Majesty, Queen Elizabeth II.

A good death is all we can hope for, isn't it. Her Majesty lived an amazing life and I think the background of our lives will all the poorer without her there.

And what a week it was! I do genuinely feel for the Royal family - all their grieving, emotions spent, and every tear wiped captured on film and shared with the world. I read that over four billion people (over half the planet!?!) watched the funeral on Monday. That alone says volumes. I know the Queen's life will continue to impact us all for years and generations! I am glad that your stomach bug lasted only a day or so. I have been "under the weather" since Monday. Ugh. Trying to be patient....and at least catch up on blog reading a bit!!:)

Being the Anglophile that I am, I was quite distressed to not only be out-of-town but to be in an area where I didn't even have internet access. As a result, I watched numerous documentaries on my 32 hours of flight time. When I got home, I was able to get the funeral--I'm so thankful for the technology that made that possible. I watched 5 hours of coverage. Even it if was after the fact, I felt like I paid tribute to a wonderful monarch in my own way! Now I wish King Charles much success!