What a difference a week makes - goodness we've had a mixed bag of weather!  We had friends over for dinner on Saturday but there was no eating outside on the patio this week, it was definitely an indoor get together.  We had a very busy day on Saturday tidying up the house as three under fives in and out of our house over the past week meant that toys had been left in every imaginable place.  The friends who came over have the most immaculate house, I don't know how they do it, there is not a thing out of place.  So the bad thing was that I spent hours tidying, polishing and hoovering so that the house looked neat and clean, but the good thing is that this morning when we came downstairs, the house was neat and clean and not a speck of housework needs to be done!  Which is handy as Sunday was Father's Day so Paul had permission to do nothing but rest and relax while I cooked him a meal of his choice.

So.  Monday.  It's now under a month to our holiday, I need to start making a list or two.  Fine weather lists and bad weather lists.  I shall be packing for all eventualities which means that we will not be travelling light, thank goodness we won't be having to worry about suitcase weight restrictions!  (Got to find a slim silver lining to make up for the fact we won't be jetting off to the sun!)

More childminding in store this week, that's going to undo all that good work tidying that I did on Saturday isn't it?  Also I want to see how I'm doing with the Photo Scavenger Hunt as we have our first check in at the end of the month.  Are you joining in?  The list is here, I think I've got five so far (although you do have to use your imagination quite a bit a lot for one of them!)

While tidying up on Saturday, I came across a book that I had received as a Secret Santa present many years ago and as I looked at it I suddenly thought 'Number 5 - The art of the fold'!  I don't remember doing many of the projects in the books but in the interests of scavenger hunting I got my paper, opened the book, did some folds, screwed up the first attempt, started again, almost managed to make sense of the diagrams, ended up with way too many folds, headed to the computer, checked Youtube and after careful research - I would like to confirm that not all 'easy' tutorials are created equal! 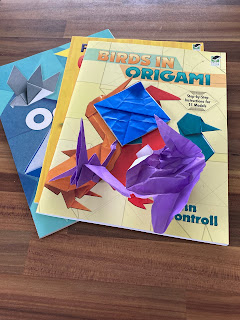 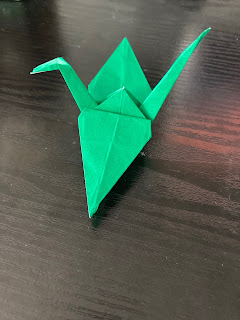 After watching three different Youtube videos - ta dah!  Practice will hopefully make perfect, I'll have a few more goes ... Now you may need to use a bit of imagination to work out what it is so I had better tell you what it is supposed to be - it's a crane!  Apparently to legend if you make 1000, your wishes will come true.  One down and 999 to go 😆

It's been so long since I've worried about the state of the house to guests, even outside guests ... I actually think I'm looking forward to a time when we can host someone for dinner or tea.

I'll raise a glass of cheer as you make lists for the holiday ... list making is a favourite skill & occupation of mine (lol), adventures are the best kind of list.

I can't remember the last time we had people in the house, as opposed to the garden ... Ive also been working on my SPSH finds and collating a post ready for next week. :)

I have a sister who always gave her nieces and nephews money for their birthday. She always folded the bills in to some sort of fun origami! When they turned 16, she made a bouquet with 16 roses of one dollar bills!

Coming downstairs to not a speck of needed housework....priceless!! Enjoy for the few days (hours) that it lasts!!:)