This appears to be a week when we thought we knew what we were doing, but then fate stepped in and pulled the rug from under our feet!

Our daughter starts a new job today, full time but working from home.  She is a very organised person, and has had plans for all childcare sorted down to the last minute.  We were going to be helping out with school drop offs and pick ups just while she got into her new routine and I was also going into the school nursery with Rosie while she had her first trial morning tomorrow.

So we were all taken a bit by surprise this morning when Leo woke with a high temperature and feeling unwell and ... you can guess what it was, can't you?  Oh yes.  All those carefully made plans and new routines all thrown into disarray.  Of course they didn't have to test him, the law doesn't say you have to any more, and a few years ago they would have just kept him off school until his temperature went down and he was feeling better.  However, they had a spare test and their conscience wouldn't let them ignore the signs so here we are.  He's actually likely to be well behaved while his mum is having meetings with her new boss online, a bottle of apple juice on one side and a few snacks on the other and he will happily watch Pokemon on the tv for an hour.  Kids are well known for being more demanding once they are feeling better!

This has come after a lovely weekend, a lot of which involved being with Leo 😳

We went to see the summer show which his drama group were performing; there may have been a little tear in my eye when he stepped up to the microphone to speak his lines.  Then on Sunday we had all the family here for lunch and with hindsight I am truly thankful that it was a glorious afternoon and we spent the whole time in the garden!

So I don't dare tempt fate by pretending to know what this week here holds, but I will have some spare time to continue with my blanket 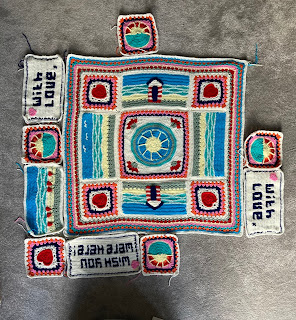 As you can see, I am a little behind schedule, all those gaps should be filled but I don't want to rush it and once it is finished, it's finished and I'll having nothing to do!  I've certainly learnt a lot from this and think that maybe now I could stop referring to myself as a 'beginner'!

Sending lots of healing & positive thoughts for Leo's quick recovery from "C". Your project blanket looks more & more amazing ... this must entered into the local church or county fair, it will win first prize.

Poor Leo, do hope he bounces back quickly - my god daughter tested positive on Saturday. :(

I agree with Mary-Lou, your blanket is really looking marvellous!

All the best for your daughter's new job...and that Leo is 100 percent soon! Your blanket just keeps getting more and more impressive!! Have a great week!

Wow. It is ALWAYS something. We live such similar lives. Your Leo and my Cami. Your Rachel and my Lauren. Hope Rachel was able to work while Leo watched Pokemon quietly. Lauren had both girls home today. She and Lucia were masked when we Facetimed. Our Covid patient, Cami, was unmasked, in a Cinderella ball gown and jumping in their bounce house. Ha!! I hope Lauren was able to 'call in sick' today.

You are certainly no longer an amateur crocheter...yarnie? hooker? fiber artist?? Not sure what the proper terminology is. But that blanket is coming along beautifully.

Well I hope Leo is on the mend; and that your daughter managed to start her new job without being too flummoxed. Good for them for testing, it was the right thing to do -- but I do see the temptation to do otherwise. Your blanket is really coming along nicely.

Your blanket is looking marvellous, and if it's an consolation I'm behind on mine too. I hope the little fella is feeling better soon x

I do hope you haven't come down "with it!" But if you do, then I'm sure you will catch up on your blanket! At least it's something to do if you have to stay home. I hope Leo is fine and dandy by now!