The saga of our son's moving house reached a happy ending on Wednesday after 6 months of stress, disappointment and inconvenience.

It's a very long story so I'll cut it short. At the beginning of the year they sold their house and put in an offer to buy a different one.  The 'new to them' house was a rental property, the tenants had moved out and it looked like it was going to be a swift process.  The sale of their house went through without a hitch, and from negotiations it looked like the next house would only be a month later.  So with that in mind, they sold, put their belongings in storage, and moved out to live at the farm where Sophie's mum lives as it was only going to be for four weeks.  Or so they thought.

However, on the day that contracts should have exchanged, the owner decided he didn't want to sell after all and pulled out of the sale.  Cue an urgent search to find another home.  They found a cottage in a small village, with lots of character and put in an offer which was accepted.  This too was a rental property so they had to accept that the tenants would be given six months notice which would mean they couldn't move in until early October.  Baby number two is due early November so it wasn't ideal but they accepted that was how it was going to have to be.  Contracts all ready to exchange at the end of September, when the tenants decided they weren't going to move out!  It took a while for the letting agent to explain to them that if they didn't move out they would be evicted as their contract had legally come to an end.  If that happened, they would never be able to rent anywhere again and possibly never get a mortgage to buy something.  They finally realised that they had to go and it was agreed that they would be allowed an extra week and that week was up on Saturday!

I think that everyone was greatly relieved to get the call on Wednesday that they could go and collect the keys and move in! 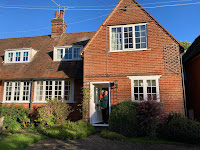 Our son, being very philosophical about things, maintains that this year's drama is an interesting story to tell in the future.

So it was about time that his sister had some drama, right?  She went into work a couple of weeks ago to be told that her part time job was going to become a full time job in the new year due to a restructure.  Now, with two small children and a puppy, full time is not an option and she's always been clear that she did not want a full time position.  Cue urgent job applications.  Which also means urgent extra child minding while she participated in zoom interviews.  I was surprised how many interviews she was able to secure and finally, after just over two weeks she has been offered a new job, part time hours working from home.

I like to think that everything happens for a reason, and I think that had she stayed in her original job, the pressure would have mounted and she would have ended up working more hours than she wanted just to keep the job.  The logistics of school/nursery pick ups would have been very difficult but hopefully she can work around those things from now on.  However the stress of possibly being out of work in the new year was something we could all have done without.

Two dramas, which have become two anecdotes for the future!

Meanwhile, the clock is ticking to 'baby day' and I'm a nervous wreck watching my phone for messages.  I think we are all convinced that the stress of the last few weeks will mean an early arrival.  I literally jump every time there is a 'ping'!

Have a good week!

Yeah for a new home resolution before baby #2 arrives & the new job sounds like a much better option for your daughter... and through all this drama of your children, you & Paul were right there with help at every turn. Your kids are very fortunate to have you close by.

Well, big changes happening there. Glad that both situations resolved for the good, but I can understand the anxiety that goes with uncertainty. I stopped and said a prayer that Baby 2 arrives on the scene at the appropriate time with no drama whatsoever for any of you.

Crikey, that's a lot of drama between your two ... here's hoping for a quiet period before the newest baby arrives!

Oh boy - lots going on! But all rather exciting. In the end:) Now the stage is simply set for the newest little to make an arrival!!

SO much happening in your world Deb! Glad all had good outcomes and now the baby can arrive as planned :) Wishing you all well.

Stressful, tense times. But now that bundle of beautiful baby girl Olive has arrived. Jon, Sophie and the children are moved in. Rachel, James, the children and Daisy are adjusted to Rachel's new job and life is settling down...I hope. I guess Leo is in school while Rachel works but what is Rosie doing? Daycare or are you guys helping to watch her?

I am back from Ft. Worth. Had such a nice weekend with Brennyn, Cady and Mustafa. Didn't get home until almost midnight last night so I have been dragging today. Helped with Lauren's little ones today and tried to get the laundry done. Hope to accomplish more tomorrow.

Glad for things to be falling into place for both of your children and their families. Hope you can relax and catch your breath and begin looking forward to Christmas.

Wow! That's a lot of worry! As they say, it doesn't matter how old our children get--we will always worry. Somehow, their worry becomes ours. Here's hoping that it's all clear sailing through the holidays!!