I'm a regular visitor to Cate's blog and she has started a month long challenge to Blog Every Day in May.  As someone who has been known to neglect her blog from time to time - I thought I would try and join in.  So here we are.  First day of the month will all good intentions firmly in place!  My family right now is todays project so here we are: 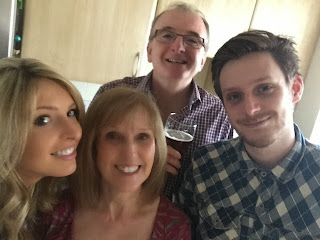 Paul - when he was made redundant four years ago it was a bit of a shell shock. But you know that expression that everything happens for a reason, you just can't always see it at the time? Well that was so true. The commute into London was becoming more and more tiring and frustrating, the new owners of his company were more and more demanding and unreasonable and the stress was starting to show on his health. But now he is 'semi-retired, working a couple of days a week doing property inspections of rental properties for a local estate agency.
Rachel - has moved out; having bought a house just down the road with her boyfriend. She works as a PA for a director at a firm of Surveyors in London. Right by the shops of Oxford Street, very handy for lunchtime shopping!
Jon - he too has moved out and is renting a flat in London with his girlfriend. Trying hard to break into the world of publishing and realising it's a tough environment in which to get a job. But after working first as an intern and then on a temporary contract, he has recently been given a six month contract at a large publishers in the city. Also trying his hand at writing and hoping to get some of his short stories published and recently heard that one  has accepted by a magazine.
Me - still working part time as a school secretary. Channelling my crafting into sewing nowadays instead of scrapbooking and loving it! Currently planning a new kitchen, which started off exciting, then stressful, trying to get everything that we would like sorted, and realising that sticking to a new kitchen budget is not as easy as I thought!
Which leaves us with the final member of the family 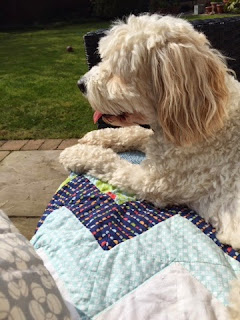 Coco - Currently getting used to having two homes. We are sharing custody of her with R so she is here during the week and spending the weekends at her other home! I suspect that she is becoming accustomed to being spoilt rotten whichever home she is in.
Posted by debs14 at 16:11

Labels: Every day in May

Ooh, I hope you do keep it up! I always enjoy coming here and would be happy to visit all through May.

I enjoyed reading what you are all up to. if that boy of yours tells a tale half as well as his Mum, he has a great chance of being a big success.

I'm so glad to see that Coco counted as a family member! It seems like a lot of new beginnings for your family and I have my fingers crossed that it will be all good.

Haha - I LOVE that you included Coco in your post, Deb. How fitting. And I see that she is enjoying one of your lovely quilts. :) Have a great weekend, and thanks for the birthday wishes! xo

Just popped over from Cate's blog to check out your post. What a great look at your lovely family right now!

It's lovely to see the family all together, I hope when my kids are grown we can get together regularly, too! Thank you for linking up.

Good luck with blogging every day. I've done it a couple of times, by taking part in Blogtoberfest. You've made a great start. Enjoy the long weekend.